KING OF THE BEATS 2

Last sunday, myself and the BEAT DETECTIVE hit the VIBE BAR in Brick Lane (London's East End) for the preview of KING OF THE BEATS 2 film - documenting once again the art of beat diggin' culture. If you have seen KOTB 1 then you already know the format....producers 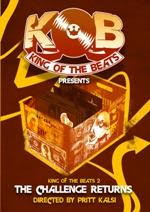 are given £20 English Pounds (or the national equivalent) to hit their favourite wax spots, raid the crates, then head back to the studio to make a beat from their finds. The catch is they have to do this without exceeding the £20 budget, or using any other records to sample from.
Devised, directed and produced by PRITT from KEY FIGURES, this second instalment is every bit as good as the first. Once agin we see the UNSUNG HEROES, and SI SPEX from THE CREATORS, but this time joined by MR THING, DJ DEVASTATE (DEMON BOYS), DJ POGO, and P-BODY from Australia amongst others. The diggin' is heavy, and the beats are tough as in the first movie. KING OF THE BEATS 2 DVD is now on release...contact PRITT on the KING OF THE BEATS link above to order your copy.
Check this shit out....

Pritt was also the man behing the excellent NU-SKRATCH website, and the short film featuring DJ SUPREME from HIJACK . Normally a very humble man, it's great to see PRITT drop a heavy beat on his own film. Great work P!! The P-BODY beat is a banger, & the UNSUNG HEROES beat is also sick, using a bargain bin HARRY NILSSON LP with some heavy kick-ass drums.

Now as you already know, making funky beats is a daily operation here at the DAILY DIGGERS HQ, but we thought we would raid the waste bin of discs filled with disposable beats, and share a few of them with you. You never know, you may see the DAILY DIGGERS on the next instalment of KOTB...?? ;o)


Kid Dyno
I'm reading: KING OF THE BEATS 2Tweet this! Posted by Daily Diggers at 09:00