It was only a few years ago that NIKE reigned supreme in the battle to supply hip hoppers with the freshest footwear. After years of asking, the legendary NIKE AIR FORCE ONE and NIKE DUNK shoes flooded the market in every conceivable material and colourway. Without doubt both iconic shoes, but it took NIKE years to realise the demand for these vintage models. Hip hop kids had been crying out for years for the basketball classic AF1 to hit the shelves again, and on re-release they filled sneaker closets across the globe. But have NIKE now overcooked it....? What's with all this NIKE ID and quickstrike, hyperstrike etc..?? To be honest I'm all tired-out with these limited edition sneakers by this and that designer. 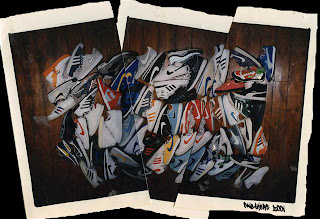 Yawn...what happened to simple straight-up funky fresh colourways?? If I wanted a laser tattoo I would grow my hair, join a rock band and get one done properly....not have it it on my NIKE AF1s!!
To the right is a flick taken by BIGGEST IRISH in 2001 of some of my kicks, and I've only just seen it recently. As you can see plenty of NIKE action.
For almost the last 10 years I have mostly sported AF1s, such is my love of the shoe, both in terms of comfort and absolute style. Of course rotating the colours and switching from lows to high tops kept me from boredom. Before that, the ADIDAS SUPERSTAR and PRO-MODEL high tops were my soles of choice (or shell-toes as I prefer to call them).
But lately ADIDAS have really pulled their fingers out in regard to re-releasing the dopest models in the freshest colours, without all that fashion nonsense attached to it. I personally do not care if 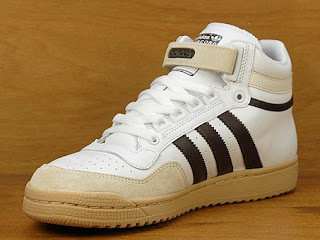 your favourite trainers are 1 of only 100 pairs in existence....if the fact is they look shit! I just copped these ADIDAS CONCORDES in the sale at SIZE? for under forty quid - 1 of only 3 billion pairs!! ;O)
Damn, I guess I'm getting a grumpy sneaker fiend in my old age.... but I suppose I'm just disappointed with the way NIKE have shook the limited edition thing until it is stone dead!
So ADIDAS are getting my money for the moment....now where's that RUN DMC record....?

Kid Dyno
I'm reading: My Adidas!Tweet this! Posted by Daily Diggers at 13:09

adi are doin some more tasty colors in the Ewings and Attitudes in 2009, look out for em in Size? and all the usual spots...

The Red/ Black Attitudes drop in March i think...