This is the second time I've grabbed a RICKY D accapella to throw over a DAILY DIGGERS beat, so I can't deny SLICK RICK is one of my favourite MCs of all time. Classics like "La-di-da-di", 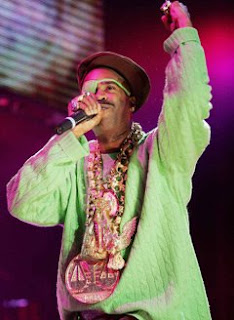 "Mona Lisa" and "Treat Her Like a Prostitute" are instant winners for me, but I could also play the 1999 DEF JAM LP "THE ART OF STORYTELLIN'" for hours on end without becoming bored. And even cameo appearances on records such as MORCHEEBA's "Women Lose Weight" (Alchemist Remix) make compelling listening.
So here we pay homage to the LONDON-born RICKSTER...as he pours his heart out over his relationship problems!

"Call me the freaker, I bump it in your speaker
Week of my birthday met this girl named Tameka
Astonishing creature made the rest look tired
Desired, though was it beauty I admired?
Out by the 41, broke, no joke
Can I have a toke, fine hooker so I smiled and smoked
Gave the girl my number, though I still felt rejected
Hectic, called me more than I expected
Months passed by, even lived together and all
Dream come true, until suddenly a call
Oh brother, why do I discover
My honey, Tameka, yeah callin' me another
Broke hearted again, it offend, and I pretend
Mistakes of a woman in love with other men


Well, tried to block it out my mind, here it was again
Other men, confronted later and she said he was a friend
Didn't believe her, she packed
Brave her, strange behavior, so silly me forgave her
Late again Thursday, alone Rick sat
Left flat, look in the mirror and I wonder where she at
Gave the girl my heart and soul, it's after ten
And again couldn't manage if she slept with other men
Out with my jewelry so you know she looked truck
Struck three o'clock, here she come, fishy like a fuck
"Come here let me smell you", I wanted to say "to hell you"
"Hi honey, sorry I'm late, but let me tell you"
It's a fast chat, need the phone, so I'm roped in
"Could you go to the store and get some soda 'cause they open?"
Again it offend and I pretend
Mistakes of a woman in love with other men"

Man would you please tell me where you got this acapella from... i ve been looking for it like crazy... I love slick, and i made a beat for it with my electribe!!!

If you need the accapella just hit me up at....