You know how we here at DAILY DIGGERS HQ love a remix? (see our "Just Messin' with Beats" posts)
Well, once again DJ CHRIS READ from MUSIC OF SUBSTANCE has been hard at it again, punching the pads and remixing some of your favourite joints. Those of you who loved THE DIARY VOLUME 1 (which we featured in NOVEMBER 07) are gonna dig this even more - THE DIARY VOL 1.5 ... 20 YEARS OF THE REMIX.
CHRIS has taken accapellas from 1989 through to present and given them the MUSIC OF SUBSTANCE twist...and the results are heavy! And there's even a lil re-touch of our very own POPPA LARGE remix. But you know this shit is serious when I tell you that CHRIS READ's NICE & SMOOTH remix is better than the original version - nuff said! 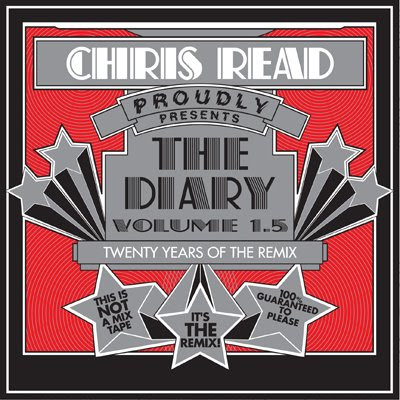 Whilst the practice of releasing mixtapes between albums to maintain relevance has become a common practice in recent years. British DJ and producer, CHRIS READ is turning tradition on its head and releasing what some might describe as an album between mixtape releases.

In January 2008, CHRIS released ‘The Diary (World’s Greatest Rap Megamix)’, a stunningly intricate 800 track mix chronicling the genre’s landmark recordings in order of release from 1979 to 2007. Quick to gain support from many of the world’s best respected DJs and taste makers (including Andy Smith (Portishead), DJ Food (Ninja Tune), Ollie Teeba (Herbaliser), DJ Format, Plus One (Scratch Perverts) and DJ Yoda), the mix was described by some as one of the greatest hip hop mix albums of all time. With tens of thousands of downloads and radio broadcasts in over 30 countries, the mix has achieved cult status and continues to receive attention via the web.

Just over a year later, with work on ‘The Diary Volume 2’ underway, Chris is releasing ‘The Diary Volume 1.5 (20 Years of The Remix)’, a tribute to the innovations in production and beat making over the last two decades. In just under 80 minutes Chris sets about selecting and remixing one iconic track from each of the last 20 years, in each case paying tribute to the production style and trends in sampling popular at the time of the original release.

From the James Brown influenced sound popularised by the likes of Hurby Luv Bug and 45 King in the late ‘80s, to the jazz sampling trends of the early to mid ‘90s, to the iconic and distinct sounds of DJ Premier and Jay Dee, all the cornerstones of the genre’s development are touched upon. The result is an impressive collection of tracks that might easily be mistaken for lost or unreleased remixes from some of the genre’s greats.

“What we’re gonna do right here is go back…”

..here's a little taster in the form of the NICE & SMOOTH CHRIS READ remix, but get yourself over to MUSIC OF SUBSTANCE and cop the FREE DOWNLOAD.

“This CD just shows how much Chris Read knows about historic Hip Hop production techniques - Its just a shame he wasn't creating this stuff during the eras he's covering as we would probably rate the man as being up there with Paul C, Pete Rock, Premier and all! - I can't think of another Hip Hop CD I've played so much in years” (Andy Smith – Portishead)

"Crazy! This is Rap History in the making. Chris proves his production skills on this one to the fullest. A wonderful and refreshing journey through all eras of hip hop. Double thumbs up!"
(Marc Hype – MPM Records / Former ITF Champion)

"Chris continues the rap anthology concept of his super-dope 'The Diary' megamix in the shape of a remix project, re-lacing acapellas from 89-2009 with historically accurate beats. 'The Diary 1.5' serves as a great platform for Chris to showcase his ample beat-making skills whilst referencing those who've inspired him."
(DJ Woody – Former World ITF Champion)

“I'm always a fan of Chris’s stuff. A lot of hard work put into it … which pays off.” (DJ Yoda – Genuine Records)

great review , thanks for lettin us hear this!..much respect to dude, some amazing beats! peace