Sometimes when out on a mission, I'm real focused on the job in hand, and thoroughly determined to bring home some "jewels" at whatever cost. Today was one of those days. OK so it often results in a mad dash across London town on the sweaty Tube to get to all the record spots in time, but hey that's fine with me as long as no-one steps on my boxfresh sneakers during the journey!
We know it's most definitely a numbers game when diggin' for cheap beats, so even if a spot is unyielding for a long period, it still needs to be hit on the regular. And today was a great example of that theory paying off. 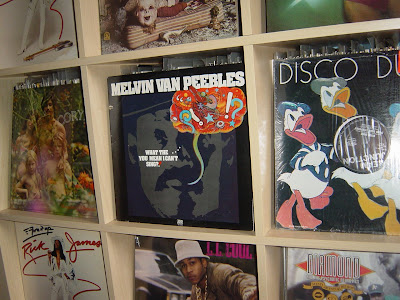 One shop on the eastside of town (which will remain nameless to conserve our secret spots) certainly put a smile on my face when I stumbled on a MELVIN VAN PEEBLES LP, strangely left in the soundtracks section (only God knows why it was there?). As soon as I spotted the bold text on the cover my break radar went berserk - was this the LP with the killer "Come On Write Me" drum break? Yes this was it, so on went the pokerface and I paid my five pounds and left the shop fairly sharpish. This place has been fruitless for possibly ten or so visits and to be honest I was so close to not bothering with it today - I'm pleased the voice inside my head said "NO...check that place out!"
MELVIN VAN PEEBLES - "Come on Write Me"


So with this happy thought I made for some spots that always give up the goods. I was listening to DJ REVOLUTION's "ABC's of Hi-Fidelity" mix on the way, so I could taste the records before I even got there. First out the cheap crates was a CANONBALL ADDERLEY LP produced by DAVID AXELROD, so again by association alone this record had to be bought. A hunch purchase maybe, but the AXELROD connection is too strong to ignore, and any ADDERLEY LP produced by him is a sure-fire winner. Also in the same shop were some cheap hip hop beats - here's a quick rundown....

SCHOOLLY D - "PSK What Does It Mean?" 12" 1985 SCHOOLLY-D RECORDS a bargain OG for two quid, but covered in hairlines.

BLOODSTONE "Unreal" LP 1973 LONDON RECORDS thanks to BEAT DETECTIVE 's post on charity digging, I now have a copy myself.

MELLOW MAN ACE - "Rhyme Fighter" 12" 1989 CAPITOL RECORDS
I'm a closet MELLOW MAN ACE fan, and this record is a great example of why. Just check out the dope cover and dope beats on this record, 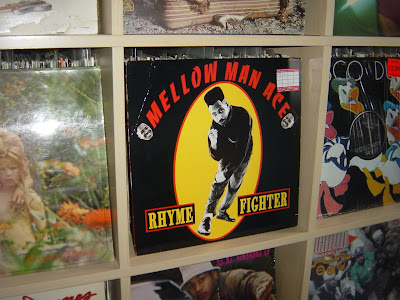 and all for a single solitary British Pound. Now that's a bargain, and I've even left the price sticker attached so you can see which second hand record shop to hit for bargains like this when in London (that is, if you can avoid their expensive stuff!)
I like the way ACE has used the DYKE & THE BLAZERS drums over a familiar disco / boogie groove (the title anyone?) with some ill horn blasts and "cold cut scratch" skills towards the end. This track is very well layered, and I also dig the "superman, batman" scratch in the first chorus. Have a listen a peep it for yourself.
MELLOW MAN ACE - "Rhyme Fighter"

Now, back to that CANONBALL ADDERLEY LP. I can't resist but drop you an audio clip.
But sorry to keep you guessing on the track name, title of the LP and the cover! I have to keep a few things under my Kangol!
ADDERLEY & AXELROD

Kid Dyno
I'm reading: On a mission.Tweet this! Posted by Daily Diggers at 18:15

PERSISTANCE IS THE NAME OF THE GAME dynO.

GLAD YOU BAGGED SOME GOODIES, MAKES ALL THOSE FRUITLESS MISSIONS WORTH IT..!

you know me M, always on the grind for more dope beats.

The DAILY DIGGERS Beat Museum is always open to you homeslice. Hopefully we will catch up this summer for a mission and then back to the house of hits! LOL

It would take me ten years to find these joints at my local lol.

Always dry,but on the odd occasion a jewel will surface.My best bet is the local car boot opr neighbourhood sale.

Mellow Man Ace is a funny one, we used to get his 12's at our local back in the day, and i have to say was never into his stuff.Having said that I would like to give him a listen once again..Dyno,the mp3 players are not working so cant check the gems..:(

Nice find with the Melvin Van Pebbles. Tell me, who the hell sampled the version of 'Superstition' on there? It's been bugging me since I got that album...

Please put me out of my misery!

Nothing like a daily beat mission, especially when you score and unsuspected gem in the process!!

yes fellas, there's nothing like getting your hands dirty in the search for those diamonds in the rough! Then back to the lab to polish them shits up.

More dope beats coming soon. Hey Krum I have not fogotten you homey, I will listen to that sample and get back to you.

I'm surprised how much better the M M Ace sounds now. I seem to remember that it sounded a bit dated when it came out. Now it is so old it doesn't matter. It's definate proof that you can find good tunes for less than £200. I'll stick it out for £3 next time.
The sample is Fatback, I think that its called Out Of Sight. Thats the lyric anyway.
See you in MVE soon mate.
Tommy Koi

The bass groove and horns on that Mellow Man Ace joint are from 'Galaxy' by War if that's what you meant. I got a copy on 7 not so long ago.

ha ha what's up Chris. I have the WAR track on a 45rpm and didn't recognise it in the Ace joint, I'm gonna try and find it now.

Nice one for the spot.

Thanks for the info - I have a mix of that 'Write Me' tune I'm putting on my blog jukebox. I never knew the artist but remember it from a tape or something Dexter (Brotherhood) played me. Anyways, thanks for the Van Peebles info.
Check my blog www.stevio.me for (ol skool) hip hop titbits.