I love the fact that major brands such as ADIDAS are now hip to what's hip (if you dig what I'm saying?) Not only are they putting out the freshest kicks that we have been screaming out for for years, and begun to whip NIKE's arse I might add, but they also seem to love the use of real hip hop in their web presence, TV adverts and advertising. 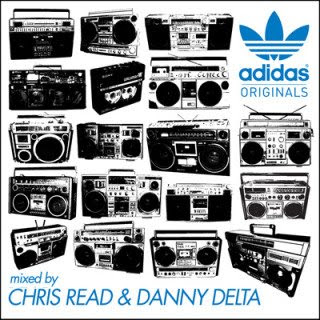 A few years ago, you would not catch me without a pair of NIKE AF1s on my feet, and ADIDAS weren't to be seen, other than the odd airing of some PRO-MODELS or classic SHELLS. But right now it's all about the CONCORDS, CAMPUS and TOP TENS that ADIDAS are throwing at me. Plus the AMERICANAS and FORUMS in the freshest colourways!

Two of East London's finest purveyors of the hip hop game, CHRIS READ and DANNY DELTA, have got together with the mighty ADIDAS who asked them to produce a summer mix to promote their new range with the theme "GAME ON!". The results are superbootytuff! Including a rocksteady remix version of "My Adidas" by RUN DMC. Dope work fellas (as usual). You NEED to check this out people!

YO! Danny and Chris - nice to see you guys are keepin' it fresh as ever! Let's do RECORD CLUB reeeal soon.

No doubt KID, i`m with ya on the ADIDAS making a welcome comeback..! The new CONCORDS, CAMPUS & TOP TENS are fresh to go..! Unlike the garish colourways that NIKE are coming up with lately. Don`t get me wrong, i like to rock a pair of AF1`S or VANDALS or BLAZERS or 180`S like the next man but ADIDAS are on the ball at the mo...!!!!!!
I`m just gonna D/L the mix now, i know it`s gonna be hella dope because i know that CHRIS & DANNY got mad skills & knowledge about the scene.
On a side note KID, have you heard the ADIDAS mix that MR THING did a few years back for their 25th anniversary.??? If not, you know that ish is dope, right bro..???

Dope stuff, fellas! Keep the classic joints coming! Suede Adidas and Pumas were the blazing joints when I was coming up. You had to rock them with the terry cloth Kangols to match.

BTW...I am linking your site to ours because you guys are all culture like us. check us out, and check out our old school video. I know you're gonna dig this! www.youtube.com/watch?v=GChP1uzjznE

yo fellas ... yeah the 3 stripes are rocking right now, ain't a swoosh in sight! LOL

Yeah MARTIN I got the MR THING adidas mix somewhere - dope stuff indeed.
Q BALL, what's up my mellow!
The KANGOL is traditional hip hop attire! Especially with Lee jeans and suede kicks (dont forget a toothbrush in your back pocket for those emergency sneaker clean ups!)

Damn that Youtube link isn't working for me. Q BALL please could you send me a link at ...

many thanks, oh and please also include a link to your site. I look forward to peeping it.

this mix is excellent.top mixing stylees..love that MY ADIDAS reggae blend/remix,fresh track selection and not at all what i was expecting.thanks for sharing :) P.