As a hip hop kid living through the 1980's and 90's, I was (and still am) addicted to each of the 4 elements of hip hop culture. I remember early records released by artists like Grandmaster Flash and Sugarhill Gang hitting the UK charts in the early 80s, but it wasn't until a couple of years later that I realised that Hip Hop was much more than just the music. 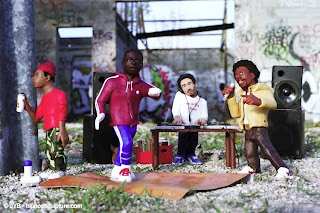 I can't recall the exact moment, but the breakin' scene was the first hip hop element that beckoned me, then followed by my sheer amazement at seeing a deejay scratch up doubles of a record. At that time I changed from wanting to be a b-boy, to wanting to be a deejay. But anyone into Hip Hop at that time, tried their hand at all elements in order to see where their talents lay. 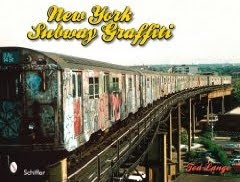 And of course the same applied to me, although my dancing was limited to locking and popping, and my can control was terrible at first. So I guess a deejay was the natural course for me to take, but I never fell out of love with the other forms of expression.
Graffiti has always deeply affected me - whenever I see some I find myself transfixed until I can read it and absorb the style and colours. And I can stand and look for hours.
As a kid, I had to endure maybe 20 years of enjoying graffiti with only four points of reference - the 2 films "Style Wars" and "Elevated Stations", and the 2 books "Subway Art" and "Spraycan Art". Other than that I had to hunt down the burners and take my own photos. But luckily, in the last few years, there has been an explosion of quality Graffiti books on the market documenting both the birth of graffiti, and it's different writers. The SUBWAY ART 25th ANNIVERSARY edition is an excellent example, updating the old book by HENRY CHALFANT (mine is well thumbed) with coffee table size hardback editions, pull-out photos, and additional never before seen photos of 80s NY transit. Other great books include ... 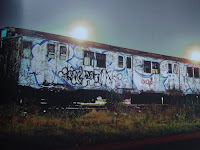 I find myself addicted to buying these books, and spending hours submerged in vivid colours and dope styles. One such release that I have been looking forward to has just landed on my doorstep, hence the reason for this post - NY SUBWAY GRAFFITI by Tod Lange. There's some never seen before NY TRANSIT action, so check it out in your local bookshop or online.

another very worthwhile purchase is a book about London graf called Crack & Shine (google/yahoo it for retailers)... features a host of well known London writers, lots of pictures and a few stories to boot! definately worth finding... the WUFC book has been reissued too and is also worth a look while you're at it...

Bro, I know what you mean. I have collecting graff books constantly. You got to check out the Miami Graffiti book. The flavors are electric and tropical. It is definitely dope.