It Never Ranes But It Pours!

Damn, I have been shit outta luck lately. Firstly, here in the UK we have suffered a month of constant rain with localised flooding and it's co-incided with the beginning of the Christmas rush. Now all this doesn't help a hardened digger like myself get out and about to get his fix of dusty vinyl. Shitty weather, traffic chaos and millions of aimless christmas shoppers are possibly three of my most hated things in life.
To add to this, a few weeks ago, my VESTAX PMC 05Pro mixer started making some God awful humming sounds (cue "Humrush" by KMD). In fact on the last BREAKS FOR DAYS radio show we struggled to keep the "hum" to a minimum during recording, no matter which knobs we twiddled with. Frustrating! We even changed leads with no success. The audiophiles amongst you will understand how this can ruin your musical experience.
This is my second PMC 05Pro (the first blew up within days of buying it) and I guess I am lucky that it has lasted almost 10 years, despite burning up maybe four or five crossfaders over that time. 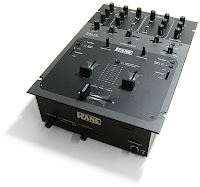 So I guessed it was time to retire the VESTAX, and one thing I was adamant on was that VESTAX were NOT getting any more of my hard earned money.
So the obvious choice was to buy a RANE - I have heard great things and had my eyes on these little beauties for some time, but the price tag of almost £700 here in the UK has put me off. But now I had little choice; either suffer the humming sound, or raid the piggy bank, drop the Vestax off at the mixer graveyard, and fill that space between the 1200s with some new technology.
Decision made, I scoured the net and was soon the highest bidder on a "mint" but used RANE TTM-56 on eBay, for a shade over £300. Sounded like a bargain to me, so maybe my luck was changing for the better.
But the RANE has arrived today, well packaged, but now with a broken cue switch WTF! The seller had placed the power pack directly onto the mixer face, which then moved around in the box during transit taking the switch with it. I gotta say I was straight up pissed.
A couple of frantic telephone conversations with the seller later, and we finally agreed on a partial refund leaving me to get a replacement cue switch, or bodge a repair somehow. This is not quite how I planned it, but I'm a realist and I know I ain't gonna find another RANE TTM-56 for less than £300. I try not to let things like this get me down, but it still sucks!
On a more positive note, I'm already liking the vastly superior sound quality of the RANE compared to the VESTAX, and this is softening the blow of today's fiasco. So at least you can expect some even crisper sounds next time we let loose with BREAKS FOR DAYS radio.

Kid Dyno
I'm reading: It Never Ranes But It Pours!Tweet this! Posted by Daily Diggers at 20:35

like you said a rane mixer for under £300 is hard to beat!! been considering ditching my 06 for a rane or ecler mixer but just never seem to have the money...

bad luck man,
i swapped my 06 for an ecler nuo 3 the fader cut in time isn't as sharp as some but it's built like a tank.
ade...

Keeping a Vestax 05 is no reason to complain though dude! Mine must be that old now and it's still holding it's own. Still a Rane for under £300.00, can't front on that!

Have had a Rane 56 for a while now, shit is bullet proof, killer faders and sound second to none, you're gonna have a ton a fun bro.