Class Is In Session

For years now I have banged on about the importance of knowledge within the hip hop community, and I do my best to steer our readers the right way at all times. Luckily I am amongst like minded people, and one thing this site has taught me is that real die hard hip hoppers are still out there in force and in every country you can imagine. When I see the TV and other media with their bullshit references to what they call "hip hop" I am appeased by the fact that there are still thousands of us real heads that know the real deal. 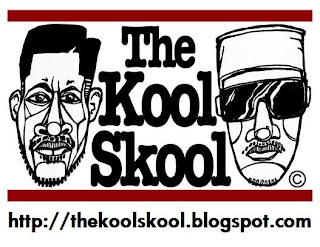 From the beginning of my experience with hip hop, knowledge was an essential part of the game. This is back in the days when kids earned respect rather than claimed it. There were no formal rules, but if you didn't know your shit back then you were considered a sucker! No question. And ever since then my thirst for hip hop knowledge has never wained.
Around 2000 I did a brief stint on ITCH FM 105.15, London's notorious Hip Hop radio station, and met a DJ there called SHUCKS ONE who hosted the KOOL SKOOL RADIO SHOW with fellow DJ O-DUBS. Now these dudes were coming from the same traditions as myself, and loved to spread the knowledge to anyone who would listen. We even had the same records in our bags at the studio one evening! I learnt most of what I know about the ZULU NATION from my man SHUCKS, and I still got a lot of time for what he has to say. He's an all round friendly guy who loves to act the idiot ... plus he's kinda nice with his when it comes to can control. But most importantly he has got stories to GO.
As you would expect with pirate radio stations, you never have the same broadcast location for too long to avoid detection. Hence ITCH FM's station moved premises and at one point we were doing shows from some pretty unsavoury locations I can tell you. But the passion for hip hop kept myself and also SHUCKS ONE turning up to the studio with our record bags, not knowing if a DTI raid was imminent that night.
Luckily my homeboy and head KOOL SKOOL teacher SHUCKS ONE now has a more stable home where he can spread the love and preach the message, and I'm happy to say THE KOOL SKOOL is still in session and taking class every week. So take a peep over there and get yourself a helping of real knowledge.

Kid Dyno
I'm reading: Class Is In SessionTweet this! Posted by Daily Diggers at 08:51