Personally I've been kinda slack on the beatmaking front lately, but that's about to change real soon. Work commitments and below par health has kept me from rocking the pads for too long now. But finally I have a week off work next week so you better believe there's gonna be some heavy drum beat action at the DAILY DIGGERS HQ til the break of dawn! I'ma blow the dust of the SP and AKAI and get real noisy on my neighbours!
Although I need inspiration before I can switch on the outboard gear. Working to a set time frame just doesn't suit me at all - I like to make a new beat spontaneously maybe on finding a dope sample, or when someone has impressed me with their own beats. I like to bounce off other beatheads, and the peer pressure keeps me on my toes. I can't just sit down every Tuesday night and produce a new banger, it doesn't work like that. I gotta feel the music and synchronise my mood.
But luckily someone HAS been busy on the 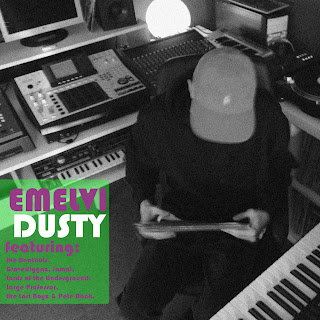 boards knocking together some crisp beats for our pleasure, namely EMELVI from SPAIN. He has remixed some classic hip hop records in true hip hop tradition. These remixes have that raw crunchy SP sound so familiar in hip hop, and the samples choices are nothing short of beautiful. I also like the fact that these aren't over-produced by any measure - just simple effective joints that fit the accapellas nicely. I think you're gonna like this. For example, I never did like JAMAL's "Fade Em All" joint, yet I like this remix version.
EMELVI uses trademark hip hop outboard gear including AKAI MPC4000, MPC2000xl, EMU SP1200, KORG microkorg, TECHNICS 1210, MACKIE VLZ 1640 and of course a heap of records.

EMELVI says "Ive been buying records since 2005 but very involved in
hip hop music since the early 90s. In my city there are no records shops to go diggin so I have to move to other cities like Madrid or Valencia, but I've been diggin in cities like Berlin, Amsterdam, Barcelona - I go diggin wherever I move, U know how it goes...ahahaha."


LORDS OF THE UNDERGROUND - "Tic Toc"

Not only are the beats solid, but the remixes are great. A few I almost like better than the OG

The JAMAL remix is on the dope tip..!!

Yeah, dude's definitely nice with it.

this EP rocks!
This guy knows what Hip Hop is about!
peace from europe!