Remember Where You Got It From

Here's a video of one of my all time favourite DMC DJ routines. DJs like Q-BERT, MIXMASTER MIKE, CRAZE, ROC RAIDA, ROB SWIFT and BABU took the whole DJ culture into the next level around the mid 90s. But I gotta give props to one of the DJs who gave them the platform to build upon in the first place, and that man is none other than DJ STEVE DEE. 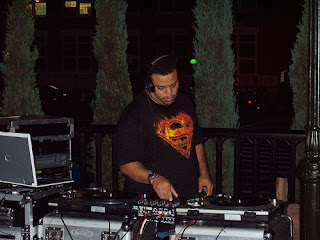 As early as 1990 you can see STEVE DEE begin to create the base on which DJing would stand in later years. He took the whole competition away from the typical double copy backspins of "Rock The Bells" and began to manipulate the records into new and more intricate patterns of his own. These were the basic building blocks of the beat juggle, but years before it was the norm. Back in 90/91 when I saw STEVE DEE's set you are about to see, I realised I was seeing something new from the DMC competition, but I couldn't put my finger on exactly what it was. The repetitiveness of previous years had gone. It was only years later when I look back on the old footage that I can see exactly where STEVE DEE was coming from.
Now you may watch this now and consider STEVE DEE's performance a little "rough around the edges", but YO this was 20 years ago homeboy! DJs just didn't scratch like that back then ... this dude was on some next shit! Just watch the legendary JAZZY JAY's face in the background and you will see that he obviously approves. Later STEVE DEE went on to become a founder member of the X-MEN.

I'm reading: Remember Where You Got It FromTweet this! Posted by Daily Diggers at 16:36

Incredible set by STEVE, back when the DMC`s were interesting & creative. Not like now when a lot of dj`s have their own wax pressed up & use just 1 record in their routine, lazy f*******..!

I love what he said on the SCRATCH DVD when he said that if you practice something every day for a year, you`ll become the best at it. Well STEVE defo proved that theory to be right..!

Yeah, dope, never seen all of this before. Wasn't Baby G DJ for the Texas group Mad Flava (damn, that's such an early 90's name, lol!) They were a bit of a House of Pain knock off, but did put a half decent album with a dope track called 'Spread Tha Butta' (another totally 90's sounding song title!)

Shame DMC turned into such a chin strokers w*nk-fest, DJ Noize's first performance in 95 was for me the best routine ever performed in competitions 25 year history.

YO DOWNSTROKE, i`ve got that MAD FLAVA LP + a couple of their 12s, pretty dope early 90s LP with great beats..! Real nice cuttin up by BABY G as well.
The DJ NOIZE routine you speak of was incredible, up there with the Q BERT & ROC RAIDA sets.!

I would have sure love to have been there to see this competition. Amazing!!! Say it like it is don't forget where it all came from.
Thank you DJ STEVE DEE!!!