Grammy Nominated Producer, World Supremacy Champion Turntablist, EPMD's star DJ, man behind the live shows of P Diddy and Q Tip... DJ SCRATCH is one of the rare figures in the world of Hip Hop whose claim to the term "Legendary" is accurate. 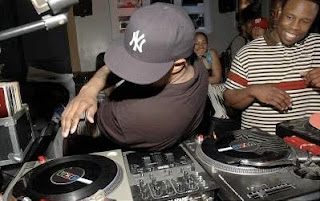 Picked up for tour support duties by Run DMC after his victory at the New Music Seminar in 1988, and subsequently signed to the ranks of EPMD, Scratch's career has brought him into contact with every name in big-time Hip Hop. Busta Rhymes, Jay Z, 50 Cent, Wu-Tang Clan, LL Cool J, Snoop Dogg, Redman, Talib Kweli, DMX, The Roots... Think of a platinum Hip Hop name, and you'll find a DJ Scratch contribution in their catalogue. When you see the hockey mask... you know that you're watching a routine made famous by a true DJ legend.

I'm reading: ScratchvisionTweet this! Posted by Daily Diggers at 09:04