The Price of Fame

During my 25 years as a hip hopper, I've always been envious of those who have the balls to get their name up. OK I've dabbled with spraycans myself over that same period, but never to the point of going out past the hour of midnight on graffiti bombin' missions. I'm not sure if admiration is the right word to 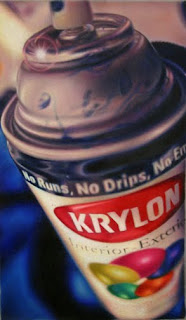 use, but I've often wished I had been a writer whether it be for the fame or perhaps simply for the buzz of painting somewhere that I shouldn't even be at - it all sounds like dangerous fun to me.
In LONDON there have been a few writers that have gone all city over the last few decades and made their name stand out along the lines as well as on the trains. As a graff enthusiast I try to stay wise as to who's bombin' and who's burning in LONDON town. Names like COSA, TOX, TEACH, CUT and VAMP spring to mind but I'm sure you London heads will instantly think of many others I could and should name. However, over the last few years the instantly recognisable "footprint" throw-up of a certain writer called 10foot, a 24 year old London resident, has been spotted trackside on almost every train line and at every conceivable angle and height on surrounding buildings. No rooftop has been out of bounds nor have the fire escapes and subways, 10foot wanted all city status whatever the challenge be. A few months prior to his colourful campaign, another hip hop friend of mine had mentioned this young cat going all out for fame, and eventually introduced me to him a couple of times when he was present. 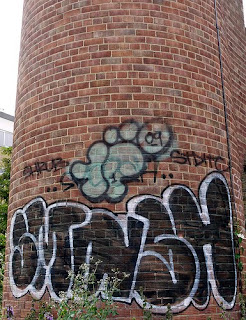 10foot is a mild mannered, polite and very eloquent chap although he admits to knowing that what he is doing is wrong as far as society is concerned. In fact if you were in a room with 20 people he is possibly the last person you would suspect of being a writer. But he had accepted the risks involved with spending his nights and early mornings creeping along the British Rail tracksides in search of clean trains in deserted sidings and rooftops to conquer.
Shortly after we first met, I noticed on my journies across the capital that his activity had increased dramatically and every line showed evidence of his night time escapades. There wasn't a journey I could make across town without seeing his name somewhere.
10foot was also the writer that made it his one man mission to cross out or go over all the "artfag" street artists in the East End of London, particularly the ever-so-fashionable Hoxton & Shoreditch areas. The most notorious incident being when he threw-up over BANKSY's long standing mural near Old Street roundabout. Good riddance I say.
But the unfortunate news came last November 2010 when 10foot was convicted and sentenced at Blackfriars Crown Court to 26 months in prison for his reign of colourful terror that caused upwards of £100,000 of damage to property (according to the BTP's figures). 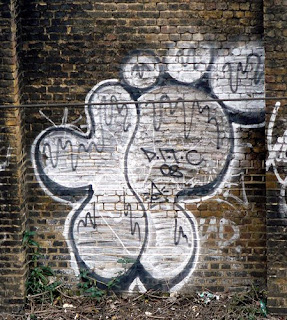 I accept what 10foot was doing is illegal without question, but I have heard of muggers and rapists that get less stretches for their crimes. It sounds to me as if the BTP are trying to flex their muscles pre-Olympic Games and saying "we don't want your graffiti on our system!" I don't want to get overly political on this subject, but if the powers that be are seriously worried about what the visitors in 2012 will make of our city and it's travel system, then maybe they should look at the whole London Underground/British Rail organisations themselves and their management teams to see how these donuts that run them consistently fuck up the system on a daily basis. For example they quote in this case almost £30k just to paint over a few instances of 10foot throw-ups at King's Cross station!! Who does their f##king painting? ....Picasso? These people couldn't organise a piss in their own pants I'm sure. Anyway you don't want me to rant on about the incredibly dirty trains, late timetables, unannounced cancellations, unstaffed stations, unhelpful (sometimes retarded) staff so I will leave the matter alone now.
For now I'm just gonna say FREE 10foot and make sure you also support the cause. For more details of his arrest and the alleged "cost" of damage peep the excellent LONDON VANDAL website. 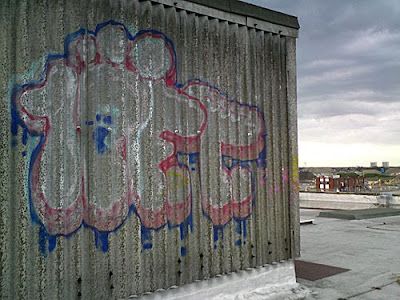 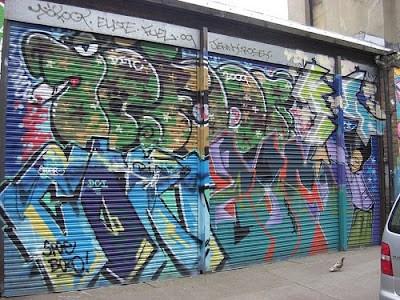 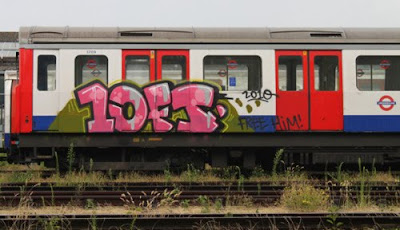 you will see in this dedication that a certain BTP officer is named and shamed. I would normally edit any personal profanity, but for all I know he may well be! 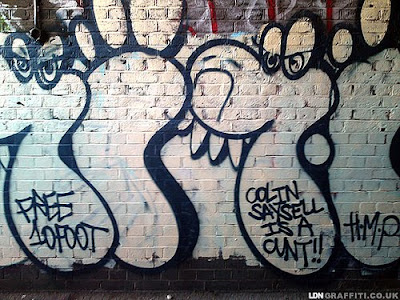 I'm reading: The Price of FameTweet this! Posted by Daily Diggers at 19:42

Very interesting read.
I, too, am a full supporter of UK graf even though I don't possess the skills. I admit to having gone on night-time bombing missions in my youth and the buzz was pretty unique.
Being older I can see both sides of the argument and having to explain it to my daughter is something I skirt around...heh, heh.