Several months ago I spoke to BIG TED from THE CHUBBY KIDS and KISS FM, and 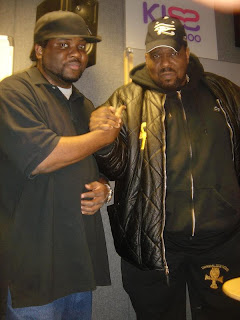 we discussed hip hop jams throughout the years. Now TED is somewhat over a hip hop personality here in the UK, as well as a recording artist in his own right, so he has hosted some of the biggest hip hop jams London has seen - I guess that makes him more than qualified to tell us who rips it better than most. Here's what he had to say...

DYNO: So Ted, tell me your favourite jam you attended in the 80's and why?

BIG TED: WOW. It's almost impossible to pick just one jam. The 80's was dope for live events. I think I'll go with The Def Jam Tour of 87 featuring LLCoolJ, Public Enemy and Eric B n Rakim. PE were the dopest, most incredible onstage army back then. The show was so tight. Flav was a wicked hype man, unmatched to this day! LL stepped out of a giant boombox and ripped it with 2 dj's-who does that these days? He should never have tried to do 'I Need Love' though, (with the sofa on stage!) I guess he aint know about a London crowd back then. Rakim did a lil magic when appearing on stage outta nowhere and blew my mind. The whole thing was incredible. What made it extra dope was the fact that I was only 17 and I couldn't afford a ticket so I went and got a job at the venue instead and got paid to watch the show 3 nights in a row! I met PE during a soundcheck. I watched LL and dj Bobcat cleaning their gold chains. That whole event was just amazing for me on so many levels. Even Westwood coming out to stand behind Dave Pearce as he introed the night couldn't spoil things!!! Hahahahahahahahahahahaha.
I have to put the Juice Crew show at Brixton Academy in as a special mention, especially since the shockingly sad passing of Super Rocking Mr Magic. That was a dope show. Kane, G Rap, Biz, Shante, Shan, Marley, Cool V , Polo, Mr C and of course Mr magic. RIP to a hip hop Legend.

BIG TED: This one is way too hard. It's another decade of great shows. Naughty By Nature at Hammersmith. Redman at Brixton Fridge. The massive hip hop thing at the Docklands with EPMD, Master Ace and a million others. Kane solo in Brixton. Pete Rock n CL Smooth at Hammersmith. Every Gangstarr show. Nice n Smooth ft Tim Dog at Hammersmith. MC D at the Fridge when he destroyed Brand Nubians!!! Rakim at Subterrania. In fact every jam at Subterannia!!
Man, there are way too many. What have I forgotten? I can't choose.

KID DYNO: Fave jam in the noughties, and why?

BIG TED: Hmmm....Jam of the millennium so far. I need more time. I'll come back to that one in a year!

favourite for me in the '80s would be stetsasonic/epmd (and probably cookie crew as was the way in those days), '90s probably PE fear of a black planet tour 1990