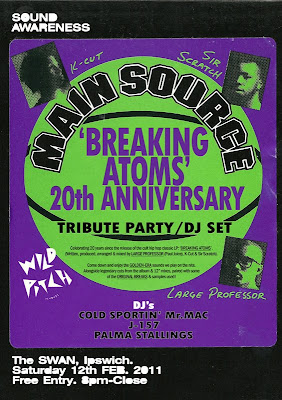 Yep it's 20 years since LARGE PROFESSOR, SIR SCRATCH and K-CUT known together as MAIN SOURCE dropped their classic album BREAKING ATOMS. Two decades later and the LP is still considered one of the best hip hop albums of all time, 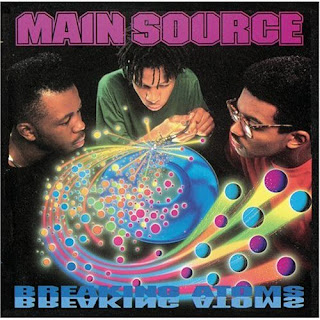 so to celebrate this anniversary the SOUND AWARENESS crew are holding a BREAKING ATOMS tribute party here in the UK playing tracks from the album, 12" mixes from the singles, and breaks used in the making of MAIN SOURCE tracks. DJs on the night will be PALMA STALLINGS, J-157 and COLD SPORTIN' MR MAC. It's all happening this Saturday night 12th February at THE SWAN in IPSWICH (UK), so if you're a hardcore MAIN SOURCE fan then you know all roads lead to EAST ANGLIA this weekend.
If you are in two minds whether to attend then you better THINK, stop LOOKING AT THE FRONT DOOR with those SNAKE EYES, and get up there to WATCH ROGER DO HIS THING cuz HE GOT SO MUCH SOUL (HE DON'T NEED NO MUSIC).
I'm reading: Breaking Atoms 20th AnniversaryTweet this! Posted by Daily Diggers at 11:02

yeah still one of the best hip-hop LPs ever ... unbelievable dope ...

Top Billin', thanks Dyno for the drop! Hopes to be a good one.