Like REDMAN said "Tonight's The Night" if you wanna hear classic material from the golden era of rap music. CLASSIC MATERIAL returns to burn in LONDON tonight at the CITY ARTS & MUSIC PROJECT at OLD STREET in the East End, and playing only the best beats and samples from 1990. Guest this month is legendary deck technician MR THING so you know it's one not to miss. Chris Read tells us more... 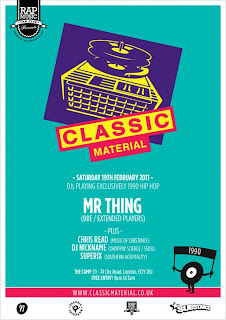 "Edition #4 of our monthly Classic Material series pays tribute to the hip hop of 1990, a year when hip hop really spread its wings with a diverse range of new sounds breaking in all corners of the US and overseas. 1990 is probably most celebrated as being the birth of the 'afro-centric' era, with debut albums from X-Clan, Professor X, Poor Righteous Teachers, Tribe Called Quest and many others hitting the stores during the year. But 1990 was also an important year for the artists from the opposite end of the spectrum: Compton's Most Wanted, Capital Punishment Organisation and Above The Law all released debut albums proving LA had more to offer than just NWA. Aside from new developments, established artists including LL Cool J, Big Daddy Kane, Public Enemy and EPMD all dropped certified classics."

Here's CHRIS READ's 1990 minimegamix to get you in the mood...it's only just over 30 minutes long but Chris makes up for this with some super smoooooth mixes of some of your favourite 1990 sureshots. Top class stuff - enjoy.