Let It Be Broke

Now it's time to give you a heads up on a super duty tough vinyl only break mix which is set to be playing from everyone's boombox this summer. DJ SKAMROK has been busy working the turntables in traditional style representing

TBB (THE BRONX BOYS) Rocking Crew at SKILLZ 2 BURN in Florida, but before he left for the US he gave me the scoop on his new CD with fellow beathead JOHNNY DETT (you may remember we featured his "Uncut Raw" mix back in September last year). This time the duo have joined forces to unleash a barrage of under-the-radar breakbeats for the b-boys and b-girls to get down to. Strictly doubles is the "modus operandi" here, and it goes without saying always rocked in a traditional Bronx fashion. If you haven't got a copy of SKAMROK's previous break mix "ROK WITH STYLE" then I suggest you hunt down a copy because that is often played and highly recommended by the DAILY DIGGERS.
SKAMROK has been buying records since he turned a teenager, and was enlightened towards 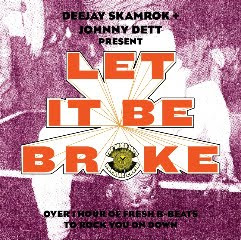 the mystical ways of the "break DJ" growing up within close radius of my good friend BREAK DJ JAMES LEACY, who sadly is no longer with us. SKAMROK was mesmerised (as I was) whilst watching LEACY spin rare break doubles as far back as the the early 90s and I guess watching him inspired us both to learn the history.
Nowadays you will find SKAMROK spinning funky records cross continent with the likes of DANNY DAN THE BEATMAN (check out the DAILY DIGGERS interview with DANNY DAN here) and SOLO 138, so you know he is in good company.

"LET IT BE BROKE" is available to buy now on CD, simply get yourself over to SKAMROK's website to order a copy. SKAMROK sets off the first half of this CD with breaks new and old, classics and obscure jams from around the world, then JOHNNY DETT kicks in with a full 30 minutes of crazy B-Boy Breaks, many unheard gems! To get you amped here's a little preview of the good stuff to come....

...and as an added bonus check out this footage of SKAMROK getting busy using some of the doubles from his "ROK WITH STYLE" mix.

As RAKIM once said "Ain't no mistakes allowed"

I'm reading: Let It Be BrokeTweet this! Posted by Daily Diggers at 19:32

No Cure doubles? ;) Big up Skamrok and Johnny Delta.