Saturday Night Get Down

Plenty of choice this Saturday night for those who wanna get down. CLASSIC MATERIAL returns at The City & Arts Music Project in Old Street London with DJs CHRIS READ, DJ NICKNAME and MR THING celebrating hip hop music from 1994. There will be some turntable wizardry on the night and the door is FREE so if you are in London this Saturday you know where to go. 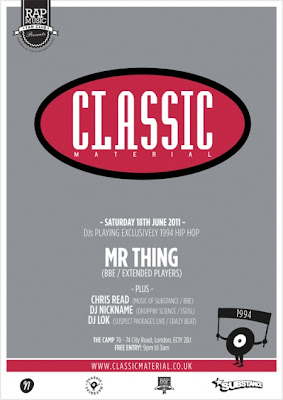 Also on Saturday DJ DEK ONE will be dropping 45rpm jewels at SWEAT in Birmingham. DEK will be returning to his hometown and celebrating 20yrs of DJing this year so expect some floor filling sureshots...

"This month sees a dj from the original 90s SWEAT club days at the institute/dance factory guesting, dj DEK ONE will be returning to his home, brum from london to spin rare deep funk and soul 45s, as well as the right classics, unreleased 45s, and not being scared to drop some of the right disco funk and crossover, too, expect some fresh soul sounds all with a funky edge, rocking the floor like he did last time, dek is celebrating 20 years as a dj this year, and has some killer 45s from collecting over that time, and will be leaving the classics to later, instead trying to bring lesser known tracks into the spotlight to help progress the scene, theyre all pure dancer street funk bombs though so no worries about the dancefloor, and hugggy bear will be there in spirit.
This is sure to be one of the most Funkiest Sweat's of 2011. Be great to see you cats there." 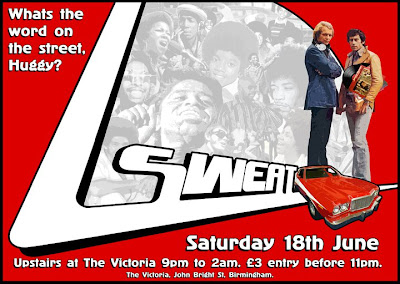 Whatever you decide, make sure your Saturday night is as eventful as this one...

I'm reading: Saturday Night Get DownTweet this! Posted by Daily Diggers at 11:30