TAKI 183 - not necessarily the first New York writer, but certainly 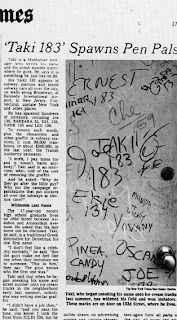 amongst the most famous. The name that spawned a thousand other people to "get up" was scrawled across New York and eventually featured in a 1971 New York Times article about graffiti entitled "Taki 183 spawns penpals". Of course any kind of media coverage like this was only going to encourage a thousand other kids to do exactly the same thing as they travelled the tri-borough. To celebrate the 40th anniversary of the article on JULY 21st 2011, TAKI 183 is teaming up with ROGER GASTMAN and CALEB NEELON to launch the book "The History Of American Graffiti".
The launch will be held at THE HOLE 312 Bowery New York NY 10012 from 7-10pm. Special Guests from Writers' Corner 188 include SNAKE 1, SJK 171, MIKE 171 and ROCKY 184. TAKI 183 signed prints will be for sale and he will also be signing copies of the book. 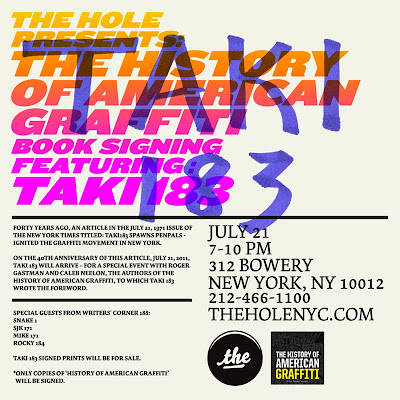