My brother from Philly and "King of Nostalgia" SKEME RICHARDS is a real fiend when it comes to collecting, and it's not limited to records. As well as being a master of the breaks SKEME also collects iconic 70s toys, blaxploitation flicks, martial arts movies, film posters, sneakers, comics etc.. Anyone familiar with SKEME knows that he is constantly continent hopping to DJ at various battle jams and b-boy events across the globe (cue the James Brown "hardest working man in show business" sample!) so how he finds time to amass all this stuff I will 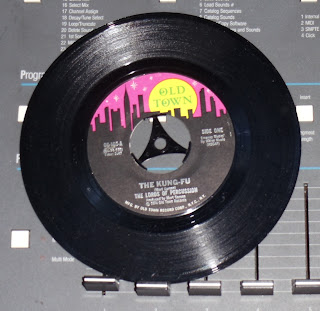 never know.
Today on his site SKEME dropped some of his favourite KUNG-FU related records and simultaneously asked the question "why do we all like kung fu?". It's true that many people who grew up during the 70s and 80s into hip hop also have a love for old kung fu films, although how the two fit together I'm not quite sure. I remember that CARL DOUGLAS said "everybody wants kung fu fighting, those cats were fast as lightning!" - I think CARL may have hit the nail square on the head there. Both kung-fu and hip hop are about skills, technique, and understanding the history of the culture. In fact the more I think about it the more I see similarities and understand the appeal of both.

Big up to my man SKEME. Here's one of my very favourite Kung-Fu related records...

LORDS OF PERCUSSION - The Kung Fu

I'm reading: The Kung FuTweet this! Posted by Daily Diggers at 22:41

Dope!! Great follow up. Hopefully others will do follow up's to their reasoning behind Kung Fu! We'll see.

I did a loosely themed kung-fu/fight mixtape over here (including that Lords of Percusion track):

Skeme, no doubt man. Thanks for the inspiration. You always deliver knockout blows!

King Megatrip, what do you mean maybe?? That's a dope mix my friend, I'm posting it pronto for people to enjoy. Props to you sir.

What up KD ...funny you posting that 45 as it was a dollar find for me in Brooklyn on my recent trip.

Lookin forward to rockin with you this bank holiday brother.