Every Posse Get Flat

The war between real Hip Hop and the "fakes and frauds" continues, and one Hip Hop soldier who constantly stands on the front line popping shots at the enemy is DRASAR MONUMENTAL over at HIP HOP BATTLEFIELD. 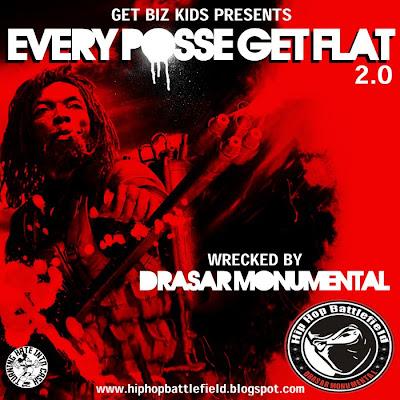 Not only does this man have the knowledge to to be fighting our cause, but he also has the "ammunition" to back up his threats.
FLASH REPORT: DRASAR yesterday climbed out the trenches to fire off his BATTLEFIELD BAZUKA in the direction of the suckers. The smoke is yet to clear, and although it is still too early to send a reconnaissance mission up into the sky, I'm sure enemy casualties will be considerable and hence another victory notched up for real Hip Hop.

It's time to don your protective headgear and flack jacket - hit the deck as DRASAR causes mad wreck with EVERY POSSE GETS FLAT 2.0.

Download EVERY POSSE GET FLAT
I'm reading: Every Posse Get FlatTweet this! Posted by Daily Diggers at 11:03