I often get frustrated with people who collect only super rare records at exorbitant prices just for bragging writes between peers and on the web. Believe me it goes on out there, and I'm often dismayed that these type of people 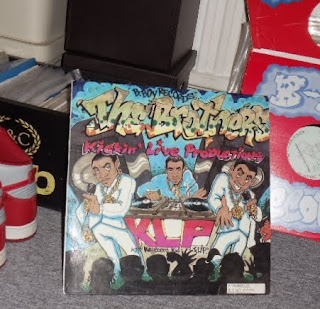 often miss out on much better records to be found in the bargain basement of their local record store if only they would get up off their arses and go out digging. Why concentrate on the overrated pieces when you can pick up something underrated for a tenth of the price. Everyone should create their own buying patterns and not just follow what the crowd is doing. Buying records can be a musical journey if you are open minded about it.

There is one particular record that I am surprised doesn't get played more often, or fetch more loot than it currently does wherever I see it. It appears on a well known Hip Hop label yet I've never really heard anyone else hype it up other than over at THE FIFTH ELEMENT. The label in question is the infamous B-BOY RECORDS, and the single I am referring to is by AKIEM & NARKIM - "The Brothers".

BDP affiliates ARKIEM THE RYTHMAKER and NARKIM THE MIC CONTROLLER (to give them their full titles) paired up with DJ SUPREME to create this track under the name KICKIN LIVE PRODUCTIONS in 1987. I remember buying my copy of this 12" based purely on the dope graffiti cover (by SIBER) with b-boy characters of all three group members. It stood out in the record shop racks and I didn't even know or care that it was on B-BOY RECORDS at the time - I wanted it anyway. And it's still one of the best graff covers I've seen to date, kinda reminds me of the excellent TUFF CITY SQUAD BREAKMANIA sleeves.

In the first minute or so of "The Brothers" AKIEM gives us a TJ SWANN-esque singing rendition to get us hype before the real business begins, although on first playing this record to check it out you could at first feel somewhat disappointed at your purchase. But after some adept DIMPLES D scratches, the track really drops into gear with a dope DMX/SP beat combination and spontaneous stab cuts throughout. And AKIEM and NARKIM's rhymes are no joke when they decide to unleash on the mic. A classic B-BOY RECORDS release and one that you may pick up real cheap if you don't already have one stashed in your crates.
AKIEM shouts out KOOL MOE DEE on the hand-drawn rear cover art, crediting him and his career for their inspiration. This is my favourite of their two releases on B-BOY. 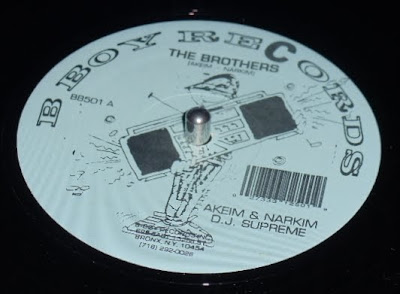 I'm reading: Highly UnderratedTweet this! Posted by Daily Diggers at 20:54

I would Echo your sentiments about the people collecting big pieces. But then again I've been lucky enough to buy most my collection before the age of eBay and am proud that I've paid peanuts for the majority of my collection but feel like I've been priced out of the market now on a lot of records that previously I would have had a greater chance of getting as a true digger. Lots of these people with the cash to splash have never got their hands dirty.

As for this record I never liked it, loved the 2nd single from The Brothers "You Can't Win", one of my fav human beatbox tracks and has the same BDP snares as Bridge is over.

But I slightly regret not buying this just for the cover art.

Spot on with your comments Dom, i totally agree with you..!

My story is i found my copy of this back in the mid 90's in a record 2nd hand shop only with no cover! Its not quite the same without that amazing artwork but still a dope record i got for no more than a pound or two in the cheapo crate.

My story is i found my copy of this back in the mid 90's in a record 2nd hand shop only with NO cover! Its not quite the same without that amazing artwork but still a supa dope record i got for no more than
a pound or two in the cheapo crate.