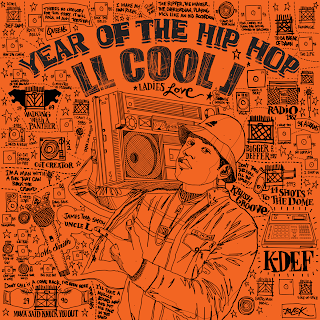 a previously lost LL COOL J track "Year Of The Hip Hop" produced by HOUSE OF HITZ super producer K-DEF. Despite being a banger of a track, the studio reels were lost for over 15 years and have only recently come to light, and trust me this is no weak LL joint this one is a sureshot.
So far SLICE-OF-SPICE have treated us to some unreleased PAUL NICE remixes featuring BIZ MARKIE and MASTA ACE and recently they have also announced some forthcoming LORD FINESSE projects which are bound to make your mouth water.

I will let RICHARD from SLICE-OF-SPICE give you the details...

"Back in 1994 K-Def was working on some beats out of the B Room in Marley Marl's House Of Hits when LL Cool J walked in on his session and said "let's make some tracks together". Uncle L had always wanted to rhyme on a track using the famous ESG breakbeat 'UFO', so he had Def lay it down with some scratches and then went to town with the mic. Both thought they had a sure fire hit on their hands but unfortunately it was never used.

The DAT tape of the studio session was feared lost for several years before it eventually turned up stuck behind a radiator! Now, 17 years later, K-Def and Slice-of-Spice are proud to present 'Year Of The Hip Hop' in all it's vinyl glory.

As with all Slice-of-Spice pressings, no expense is being spared for this vinyl labor of love. Outside of a full color cover, with a 3mm spine, the special limited edition version comes on solid orange vinyl, with individual gold stamp numbering. Once again we're coming at you with strong cover art from the legendary Joe Buck, and personally we think this is his best one yet!

This release is not only for the real hip hop heads, it's for the vinyl connoisseur."

Get over to SLICE-OF-SPICE to pre order a copy before they sell out like hot cakes!

pure heat, it kind of makes you that little bit sicker that James had to fall off so hard and has now reduced himself to playing some pro conservative fuckwit in yet another american police show really badly. jeez Uncle L start smashing mics again mate, there's more to life than your pecs!!