Hard To The Core

We seem to be indulging in vintage UK hip hop this month at DAILY DIGGERS HQ - first the FRESH SKI & MO-ROCK interview and then earlier this week we gave you a heads up on INSANE MACBETH. The UK's hip hop history is definitely one to be proud of and it sparked a conversation between DRASAR MONUMENTAL (HIP HOP BATTLEFIELD) and myself regarding the quality of early UK rap records. 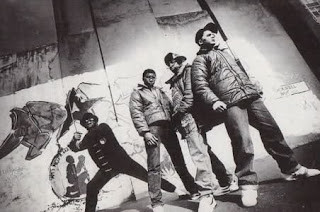 I appreciate that back then the Americans were naturally going to support their own artists first and foremost, but I am often surprised at how many UK records made it across the Atlantic. So you see DRASAR amazed me at how many good UK artists he knew of, but I wanted to give him a heads up on some other good UK records worth a listen. Now this is by no means a definitive selection on "must buy" UK rap records from the early days, simply some dope records with a bit of kick in the production department. So pump up your speakers and baton down the hatches, it's time to get hard to the core London style... 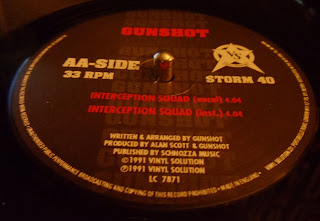 Original members were not only WHITE CHILD RIX, MERCURY and ALKALINE but also BARRY BLUE and Q-ROC. Uptempo beats, frantic rhymes and heavy scratches ensured they were noticed by everyone in the UK scene at the time. There was no compromise with these guys - and it felt like a full frontal assault when you dropped the needle on a GUNSHOT record. Out of all the UK artists these dudes are up their amongst my favourites, and I know for a fact many people credit GUNSHOT with the spawn of British Hardcore Rap music, or "Britcore" as the Germans name it. All I can tell you is that they were consistent with their music and certainly gave most other UK crews (including HIJACK) a run for their money.

HIJACK - "The Shogun's Assasin"
Speaking of HIJACK, I would be mad not to include a record from these amazing legends of UK hip hop. I don't think any other group made an impact like HIJACK did - who can when forget they upstaged everyone on the 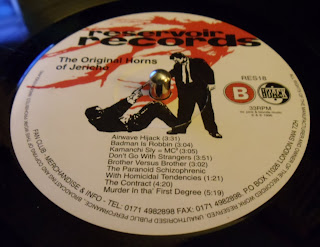 RHYME SYNDICATE tour including ICE-T! And although they were eventually signed to SIRE WARNER BROTHERS in the USA it was frustrating here in London waiting for their full length album to hit the streets. Especially after their "blow-you-away" singles STYLE WARS and HOLD NO HOSTAGE.
If you ever wanted to chalk up a list of the best MCs this country has seen then the name KAMANCHI SLY needs to be on there somewhere. As for the others on that list ... well I think we will save that debate for another time. Have a listen to "Shogun's Assasin" a HIJACK track that never made the HORNS OF JERICHO album released by WARNER, but was then included on the ORIGINAL HORNS OF JERICHO album on RESERVOIR DOGS RECORDS which is the LP as the group first wanted you to hear it. This double LP is well worth tracking down as it has some amazing DJ SUPREME instrumentals and several tracks and versions not on the regular LP.


SHAKA SHAZZAM, THE ICEPICK & HUNTKILLBURY FINN - "Burial Proceedings In The Course Of Three Knights"
The title alone send chills down your spine doesn't it? And so it should because this here joint is also produced by HIJACK 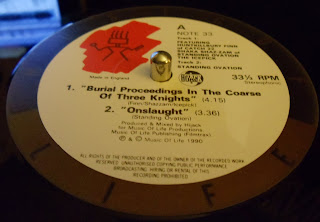 (or at least it's credited to them while they were still signed to MUSIC OF LIFE). So you know the beat is a sureshot, and the three MCs collectively reak havoc on the microphone. Anyone who remembers this record when it was released in 1990 knows what reaction this created in the clubs! And hence it's a collectible record with both UK hip hop fans and European and Japanese heads who know the deal. If you want a dope slice of hard UK hip hop then this record is a MUST buy!


HARDNOISE - "Serve Tea, Then Murder"
What a great name for a record - and one that certainly tells us that HARDNOISE had a no-messing attitude. This is another record that had a huge reception when it was first played on UK radio, 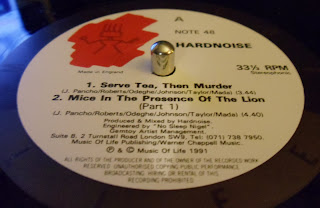 although this is the not the first release from HARDNOISE. Their previous single "UNTITLED" also on MUSIC OF LIFE RECORDS was an absolute stormer in 1990 and is now considered the epitome of what was dope back then. HARDNOISE members were DJ SON, DJ NYCE-D, AJ, GEMINI, TLP1, and finally DJ MADA joined the crew. They were a force to be reckoned with at the time, but unfortunately only ever dropped these two incredible singles before parting company and pursuing other projects.


PRIME RHYME MASTERS - "You Need Discipline"
This KOLD SWEAT twelve inch is a real headbanger of a record from 1991, but unfortunately I believe it is the only release from this crew (unless you know any different? If you do please let me know). 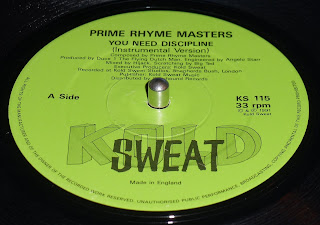 A relentless uptempo beat with plenty of cymbal crashes and horn blasts creates the perfect backdrop for the PRIME RHYME MASTERS to lash together their verbal gymnastics. The KOLD SWEAT label was responsible for some great records and I have to say this is one of them. Produced by DUCE 1 THE FLYING DUTCHMAN with scratches by BIG TED.
Now there seems to be a pattern here because once again HIJACK are credited for the mixdown on this track, it seems DJ SUPREME was a busy man in 1990/91.

I'm reading: Hard To The CoreTweet this! Posted by Daily Diggers at 21:40

the beginning 90's was a golden age for UK Hip Hop. I got a full crate of that stuff. Kold Sweat released a lot of 12" and EP's in a short period of time, although the quality was not always that good. It was a very creative and independent.

Hardnoise, have released Pure Destructive Power,Black Hole of Pandemonium on a 12" white label, via Gibo Productions.

Check it out folks.