Back in the mid 80s I was just a teenager and still being at school I struggled to afford all the essential new hip hop 12" releases that were available through GROOVE RECORDS, BLUEBIRD, HMV MEGASTORE, RED RECORDS and other long since gone record shops in London. Although I was determined to grab what I considered the best of current releases whether that was FAT BOYS, RUN DMC, SCHOOLLY D, ROXANNE SHANTE or THE B-BOYS etc etc..
When I look back I'm still happy with the majority of choices I made back then (with a few exceptions) and I have of course filled in the blanks over the years where I did miss a certain record. For instance when I chose "Shawnie G - Mission Impossible" 12" over the much better "Biz Markie - Make the Music" 12" whilst in Parrot Records in Winchester I got home to realise the former of the two was just an average record and I shoulda chose the Biz classic. Oh well! 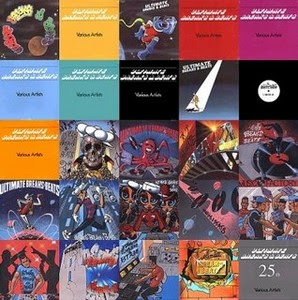 One thing I do remember well is wishing I could afford to buy all the excellent ULTIMATE BREAKS & BEATS records put out by the legendary LENNY ROBERTS and edited by BREAKBEAT LOU. Those records were like the holy grail back in the 80s, and we knew NOTHING then about proper digging for break records. All we craved was the latest 12" rap release. So yeah I slept on many of the ULTIMATE BREAKS & BEATS series when they were originally released, and shame on me for doing so. Although I like to think that I have more than made up for it since then by searching out all the UBB classics I could on 45rpm.
LENNY ROBERTS worked in DOWNSTAIRS RECORDS according to DISCOGS (EDIT: but not true according to LOUIS FLORES thanks for clarifying that LOU) and along with people like STANLEY PATZER (MUSIC FACTORY) he had an encyclopedic knowledge of the "break beat" records that hip hop deejays were spinning at parties. He realised early that he could produce compilation albums featuring many of these hard to find breaks and sell them like hot cakes. Finding the originals was no easy task back then and it's no easy task even now (although achievable these days if you persist on eBay and earn your stripes whilst out diggin' etc..). Originally he dropped a series of comps called the OCTOPUS BREAKS, but then switched to the STREET BEAT label design after eight volumes on OCTOPUS (Edit: BREAKBEAT LOU explains that this change was when they went legit with the comps).
Now I guess I have to thank LENNY ROBERTS (BREAKBEAT LENNY rest in peace) and also LOUIS FLORES (BREAKBEAT LOU) for planting that seed in my head many years ago which lead to my obsessive search for all things UBB, not only the original comps but also the original pressings that spin at 45rpm. If you don't know by now - I'm a sucker for drum breaks, and an even bigger sucker for an original 45s.
Here's a few of the OG breakbeats I have picked up on 45rpm, but only those featured on the latter STREET BEAT LABEL. I will drop a few 45 gems off the OCTOPUS series at another time. And remember ... the UBB series listed the track title only without artist names, so there ain't no shame in my original 45 game! 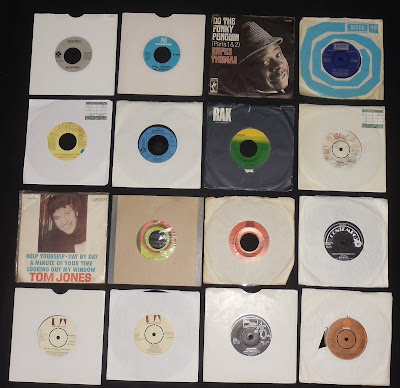 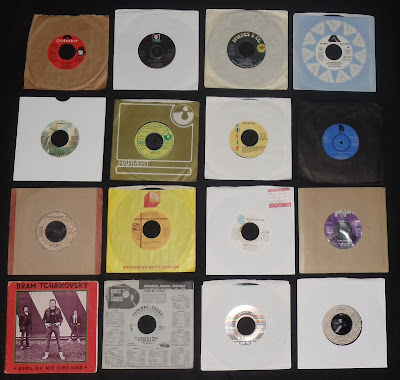 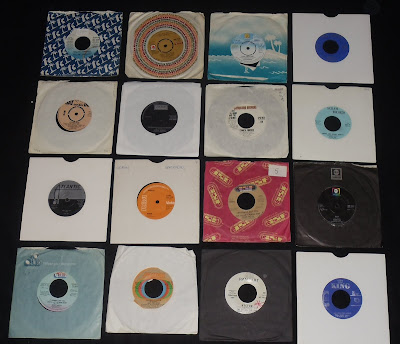 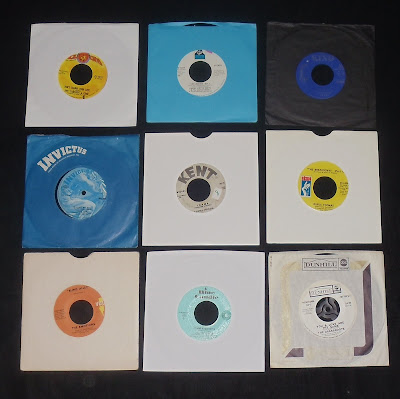 BIG thanks to BREAKBEAT LOU for correcting me on a couple of points in my post, and also shout out to all the deejays who prefer to rock their beats on 45 revolutions per minute ..... MAC MCRAW, DJ FORMAT, ROB LIFE, JX, FORREST GETEMGUMP, BIZ MARKIE, DJ MARK 45 KING, KID CAPRI, DIAMOND D, ROCKIN' ROB, DJ MURO, SHADOW and CHEMIST, SKEME RICHARDS, MR SUPREME, and of course BREAKBEAT LOU and all 45 junkies worldwide. It's time to delve in 2012!

Hey props to YOU Louis. I'm pleased to see you finally getting the recognition you deserve.

thanks Louis for correcting that ... I've added a note clarifying this point.

And ONE of these 7" records pictured is NOT actually the track featured on UBB but it is the same music and same band but under another title??

Has anyone spotted it?? Let's see who KNOWS?

Class is in session!

LOU, you know that BRAM TCHAIKOVSKY track had everyone buggin'! It took me years to find that one out.

I used to think ... "this don't sound like the composer TCHAIKOVSKY"

Yo I think I have a spare of that one.

Hit me up at kidbiscuit at hotmail dot com if you need a copy Lou. My way of saying thanks.

the most dismal of digs is instantly brightened whenever i find a UBB 7"
thanks for sharing your collection D.

That Hot wheels is a tough one to find KD.

Yep, I to have trouble passing on any UBB dig in the field.

Respect to Lou seen him spin a couple of times in NYC, love it when he brings his little milk crates of 45's out.

Knowledge, Knowledge. And a pretty serious collection there Dyno. I have many of the comps but only around ten of the original 45s so reading your story retains my inner burning desire to keep puttin in the field work. Props dude.

Really nice Dom ,I counted mine up and I have 36 altogether with a lot of doubles.Excellent post as usual.
Ade...
p.s I'm building up a nice stack of goodies at the moment so hopefully some new mixes will be just around the corner!