As MARLEY MARL mentioned in the video I posted a few days ago, the JUICE CREW are due to tour Europe this Spring and have just announced the London date at the HMV FORUM (formerly the THE FORUM and before that the TOWN & COUNTRY CLUB) in Kentish Town North London. 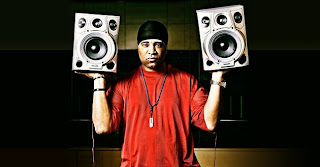 On the bill are COLD CHILLIN' RECORDS legends BIZ MARKIE, BIG DADDY KANE, ROXANNE SHANTE, MASTER ACE, MC SHAN and not forgetting CRAIG G. No mention so far of MARLEY on the flyers but according to the super producer himself he will be there. In my opinion it's a shame that KOOL G RAP isn't on the list of acts, and secondly it's a tragedy that MR MAGIC aka SIR JUICE is no longer alive to join in the fun. I just hope the recent "words" between SHAN and MARLEY doesn't affect the line up - I was at a BIZ MARKIE / BDK gig at the forum in the 90s where BIZ never showed. Despite massive disappointment at the time KANE still tore the roof off the Forum and truly made up for the lack of BIZ. It's almost 25 years since the members of the JUICE CREW had a stranglehold over the hip hop charts. I personally don't wanna miss this gig as I fear it may be the last chance we have in the UK to see all these rap legends perform under one roof. Don't delay, get your ticket today.
And to make up for KOOL G RAP not making an appearance, here is a slice of his performance from the UK COLD CHILLIN' TOUR from whaaay back in 1988. Whistle posse in the house! 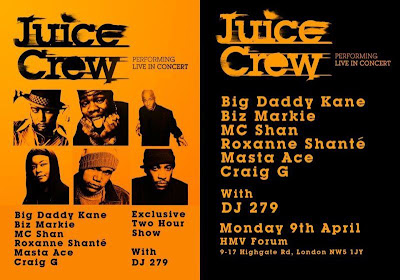