One hip hop record that I have always wanted to own is "Walk Thru Hell" by MADMAN SHAWN which appeared on the "EAST COMING THRU" 12" EP on EAST NEW YORK RECORDS. I remember hearing this serious headnodder on a few (but not many) US radio shows, although it never seemed to get the hype that it deserved amongst my peers. The title alone was enough to make me wanna buy it, but from the moment I heard MADMAN SHAWN was spitting over IKE TURNER's "Cussin' Cryin' & Carryin' On" drum break I made it my mission to find this release. 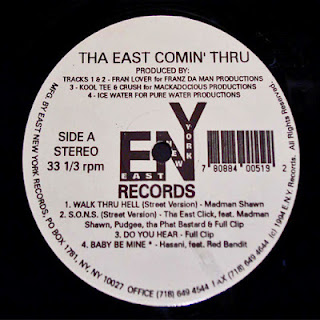 It wasn't until a few years later that I finally saw a copy and that unfortunately was being auctioned on eBay and made a crazy amount of dollars! And more than I could afford. It was at that moment I realised I wasn't the only one who had been searching for this dope little indie joint from 94, and I knew it wasn't an easy pick up either cuz I hadn't seen even one copy in any record shops during ten years of looking. Come to think of it, I don't even know a person who does have a copy! So when I spotted that ROOTS FORWARD RECORDS have decided to re-release this banger on a 45rpm seven inch format, and with the blessing and involvement of MADMAN SHAWN himself. Suffice to say I was a happy man despite the fact that I am normally a fiend for the ORIGINAL release - sometimes you gotta accept that you are just not gonna find an OG copy however much searching you do. So at the measly price of fifteen bucks I will be scooping up one of these little gems with the quickness. May I also suggest you do the same in order to prevent weeping once they're all gone. Have a listen below and tell me this ain't a stomper.... Get yourself over to www.rootsforward.com to secure your copy - orders begin tomorrow Monday 13th February. Price is $15 for black and red vinyl copies or a signed test press for $30 if you feel that way inclined.
I'm reading: Walk Thru HellTweet this! Posted by Daily Diggers at 17:58