While we are on the topic of UK hip hop producers, check out this photo of London legends MO ROCK and INSANE MACBETH - two men who between them were responsible for several gritty underground London beats in the late 80s and early 90s. But this is no vintage photo, it was actually taken just this week at the mastering of BODY SNATCHERS "Genocide" 12" at BLUE PRO AUDIO studio. Great to know both of these characters are still involved in producing and releasing hip hop records in the twenty dozen: MO is holding INSANE's recent KINETIC EFFECT 10" release, and INSANE has a copy of the "COARSE SELECTORS" EP by FRESH SKI & MO ROCK which dropped on the DWG label a year or so ago. UK history is deep when it comes to hip hop music, so if you are not from these shores and want to know more then you should get your Google on, look up these two dudes individually and check out their pedigree. 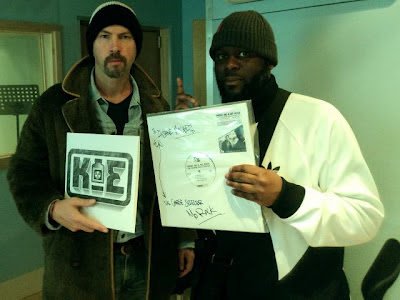 I just want to make it very clear, Insane Macbeth, and Mo Rock, are not producing the Body Snatchers "Genocide" EP.

It was produced by DJ Supreme in 1997. I am the Executive Producer on the 2012 official release.

MO Rock is not involved at all in this project.

Insane Macbeth, has been hired to oversee the mastering.

thanks for making that clear Gibo, and apologies if that's the impression I gave. Please do keep me updated on the BODY SNATCHERS "Genocide" project.