Dom And A Beer

Around ten years ago I recorded a mix of beats, breaks and samples which I initially started at one of our Record Club meetings by simply dropping the funkier portion of records and then chopping into the next one and so on. At the turn of the millenium we were all listening to the amazing KON AND AMIR "On Track" mix series CDs which were bumper full of samples and choice beats, so I guess this was the format I was aiming for at the time. And because of the circumstances of the Record Club, I think I may have had one or two beers before I took to the turntables, hence the title "Dom And A Beer". I warn you, on listening you will be left scratching your head thinking to yourself "who used THIS?". Enjoy it folks. Quality is somewhat lo-fi as it was originally recorded on Minidisc. 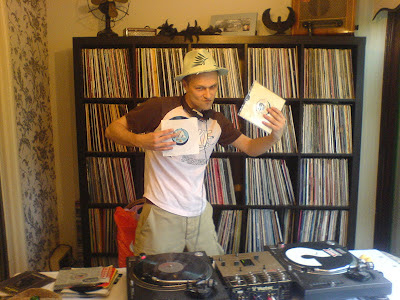 I'm reading: Dom And A BeerTweet this! Posted by Daily Diggers at 08:30

so JP you recognise the racks - but what about the hat? LMAO

Hey Anonymous glad you are enjoying the nuggets