I've just heard from Benny at ILL ADRENALINE RECORDS to confirm the pre-order of the first unreleased offering from THE LEGION. Straight from The Bronx comes the trio CHUCKY SMASH, MOLECULES and CEE-LOW. As THE LEGION they first appeared on the amped posse cut "We Boys" on BLACK SHEEP's sophomore album "Non-Fiction" in 1994. Later that year, as signees to BLACK SHEEP's One Love imprint, they dropped the brilliant underground classic "Jingle Jangle" – an ill piano sample driven track with a highly quotable finishing verse from DRES. THE LEGION followed up with "Legion Groove" and their now much sought after debut album "Theme + Echo = Krill" (1994) featuring BLACK SHEEP, CHI-ALI and SHOWBIZ & AG.
After a hiatus for a few years, they resurfaced with the single, "Street Thing / Caught Up" (1998) on Legion Records/Fat Beats and some appearances on DRES's "Sure Shot Redemption" album. Then the Bronx trio went quiet.
While MOLECULES handled dope production for DRES, MILANO, AMANDA MARSHALL and even appeared on PINK's "Stupid Girls", CHUCKY SMASH has been hosting radio shows in the BX. The three long-time friends never stopped doing music together but it was already 2011 when the trio finally made a dope comeback on the BENEFICENCE collabo track "Aim, Fire, Spit". 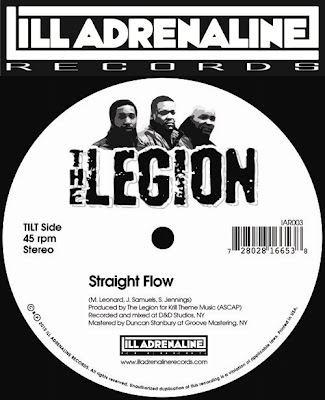 Now THE LEGION and their typical raw Bronx sound is back! ILL ADRENAILN have just dropped a 7-inch single "Straight Flow / Automatic Systematic" which features two unreleased tracks recorded and mixed in 1995 at the legendary D&D Studios, NYC. These two bangers are just a teaser for all you supporters of that true hip-hop sound. So stay tuned for a rough and rugged THE LEGION full length album later this year with additional production by DJ PREMIER, SHOWBIZ and BUCKWILD!
Pre-order your white vinyl or regular black version through ILL ADRENALINE.
I'm reading: The Legion - Straight FlowTweet this! Posted by Daily Diggers at 18:39