Awesome: I F#ckin Shot That

The PRINCE CHARLES CINEMA in Leicester Square LONDON is just about to show the 2006 BEASTIE BOYS film "AWESOME: I FUCKIN SHOT THAT" - a film put together by MCA's own production company celebrating 20 years of BEASTIE behaviour, featuring unseen live footage and backstage antics. This will be the first time the film has seen a cinema screening in the UK and will be a a poignant affair in the wake of MCA's passing. The screening is on the 18th MAY at 18:45. Thanks to DJ SKAMROK for giving me the heads up on this one, I NEED to see this. Not to be missed if you were around in 1985 when these fellas first dropped. 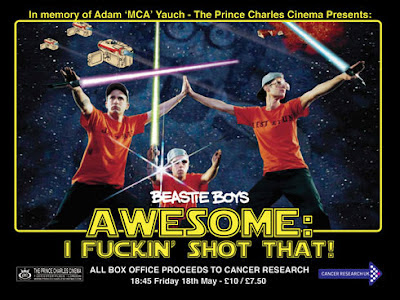 I'm reading: Awesome: I F#ckin Shot ThatTweet this! Posted by Daily Diggers at 08:12