Whenever I pull out some crispy drum breaks that revolve at 45rpm you lot out there seem to perk up more so than usual and leave far more comments. Is that because, like myself, you prefer the snappier sounding drums which at 45rpm kick much louder than the lesser quality 33 1/3rpm album version? Or maybe it's due to the fact that 45s seem to be easier and cheaper to pick up cheap in the field these days? Or is it simply because of the recent trend (many of the better known and better respected hip hop DJs these days are dropping 45 sets rather than the usual 12" selections)?. Either way it's all gravy with me, and it's only fair that I give you some MORE of what you bargained for. Today I've decided to pull out some serious breakbeat heat on 7" vinyl and I'm sure by now you expect nothing lesser from the DAILY DIGGERS crew. Weak kick and snare business is simply not an option, but plenty of funky headnodders and straight-up b-boy classics. 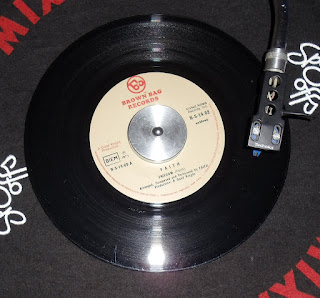 but if you a keen break mix fan then you will certainly recognise the track and the beat you are about to hear. I believe FAITH are a religious rock band hailing from Indianapolis in the States, and this track is taken from their first LP. However this clip comes from a Portugese picture sleeve 45rpm single which I picked up some years ago for next to nothing price wise. I have yet to see another 45 on my travels but I do know there is a US 45rpm out there too, plus the LP does show up in rock record shops from time to time. Great chanting in the intro sets the mood for the track and the funky groove continues for the majority of the record until the drummer is finally allowed to beat the skins with as much ferocity as he dare. This is one for the beatheads, as it's great for chopping up in the sampler!


MAIN INGREDIENT - "You Can Call Me Rover" 1973 RCA RECORDS
These are some of my favourite drums, despite the fact that they are at a much slower tempo than I normally prefer. 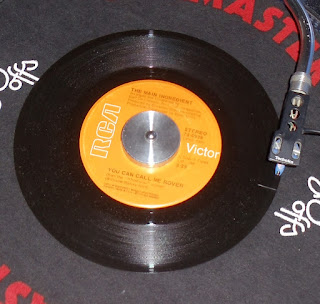 I think it may be because of the way that LARGE PROFESSOR so neatly looped them for "Hang On Kid" by NIKKI DEE on DEF JAM RECORDS in around 1991. This was always an under the radar LARGE PRO production, and great for rocking doubles so I had to buy the soul 45rpm with the drum break when I saw it. On RCA so it's a relatively easy one to pick up without costing the earth. The drums are slow but have a fantastic shuffle to them, and although EXTRA P sped them up for his NIKKI D production I'm happy to rock them at the original tempo. In fact I have even added a one minute or so clip of just the drums so you can bop your head to this.


KOOL & THE GANG - "Jungle Jazz" 1975 POLYDOR RECORDS
Wow, where do I start with this one. Suffice to say that KOOL and his GANG were one of THE funkiest bands that there ever was. Without a shadow of doubt. MR BROWN is the GODFATHER of the funk and I am a huge fan, 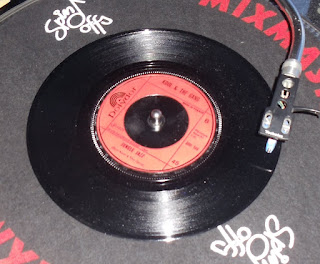 but KOOL & THE GANG are the unmentioned funk outfit who gave us so many incredible drum breaks and absolutely killed it on a few of their early joints. I could listen to their stuff all day but I do get annoyed however when I tell my non-music colleagues that I'm into KOOL & THE GANG and they only respond with "LADIES NIGHT" and "CELEBRATION" as examples. My choice here is the 45rpm version of "Jungle Jazz" which provides us with two of the most dirtiest funkiest afrocentric drum breaks of all time. From the word go we are treated to a gritty drum loop with funky woodblocks, followed by rasping flutes and surging horns building to a frenzy at times. After three and half minutes a short horn blast indentifies the coming of the second drum break, just as dope as the first one. The title "jungle Jazz" is very apt considering the tribal mood of the song. If you haven't already got lots of early KOOL & THE GANG records in your crates then you really should have!

BIRD ROLLINS & THE NEW JERSEY BURNERS - "Do It To It" 1970 CALLA RECORDS
I had made a mental note to find this record many years ago, but over the time since then I had forgotten how good it actually was. When I spotted a slightly battered copy recently for small change, 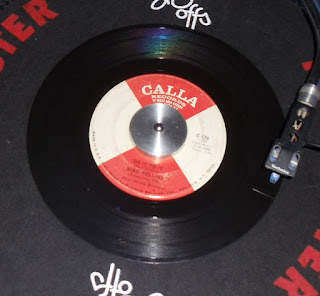 I was dubious whether it was going to be any good. But then I spotted the telltale sign of 2 dark patches within the grooves of the vinyl - this was all the confirmation I needed (just visible on the photo). The title "Do It To It" was always easy to remember, as was the red and white label, but I could never recall the artist and had given up looking for it. It had left my mind entirely, and then turned up a couple of weeks ago during a record hunting mission which didn't really bear much other fruit on the whole. But as I returned home to drop this little gem I was first struck by the fact that it is a real frantic uptempo northern soul stormer (great description eh?) but when the double breakdowns come (as identified by the two separate dark patches in the vinyl) the drums are hard and funky and take no prisoners - check it out! 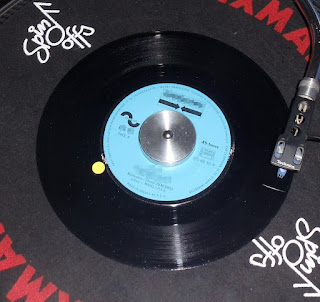 zooming in on the photo either because I've blurred as much info as I needed to to ensure some confidentiality. All I will tell you is that I stumbled on these little 45rpm gems (I say two because I scooped doubles on the same day) by a prog rock band which are on a French label, and I'm guessing it's from the early 70s but I cannot be completely sure with the lack of a date on the label or sleeve. All I can tell you for sure is that these drums are completely off the wall and as infectious as chicken pox, even if the track itself is a little "way out there" in parts (typical of early prog rock stuff). But who dares tell me that this beat ain't the illest! (Big shout to SUPREME LA ROCK for knowing this one within two minutes of me posting it up!)

And you made me spend more money on records! Damn!