Disco At The Marisco

This weekend, those dudes over at DIGGERS WITH GRATITUDE are holding their Summer bash at THE MARISCO club in Woolacombe on the UK's south coast, which is incidentally the oldest standing Discotheque in the United Kingdom. Live on the night will be DJ FORMAT, EMSKEE and CHUBB NICE with a performance by THE GOOD PEOPLE (EMSKEE & SAINT), and to help celebrate the event DWG have also released a 45rpm 7inch single by THE GOOD PEOPLE feat production by DJ FORMAT. Get yourself over to DWG for more details, and get yourself down to Devon for the partay! 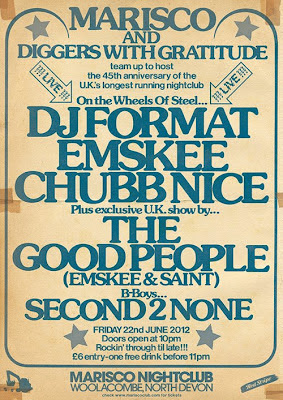 I'm reading: Disco At The MariscoTweet this! Posted by Daily Diggers at 07:45