I wanna say a heartfelt thank you to BABY CHRIS (aka CHRIS LIGHTY) of THE VIOLATORS - a man who devoted much of his short life to making good things happen within Hip Hop music. Although he worked behind the scenes for many years as security to RED ALERT and BOOGIE DOWN PRODUCTIONS, he rose up through the ranks to become a hip hop mogul in his own right, and was considered the "can do" man in the industry. 50 CENT reportedly earned $100 million through the vitamin water deal CHRIS brokered for him. Not only was he powerful within the industry but he was also greatly loved by artists and peers alike. And who could forget his time as mentor to A TRIBE CALLED QUEST? Or his help in getting COOL J back in harmony with his hardcore fans. What about his verse on "Pass the 40" on the first BLACK SHEEP LP? Or the fact that he demonstrated to MOBB DEEP that they could diversify with their single releases. I could go on for days. I choose not to dwell on the circumstances surrounding his passing, but I prefer to remember his contributions (there are so many) to Hip Hop. THE VIOLATORS will live on forever. 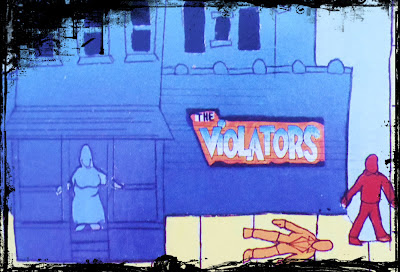 I'm reading: Thank You Baby ChrisTweet this! Posted by Daily Diggers at 20:03

I agree. It was a sad day for Hip Hop... Without Chris Lighty we may not have been blessed with so many classic Hip Hop joints. I can't imagine many labels putting out the Cru's - Da Dirty 30 LP. Perhaps one of the most slept on Hip Hop LP's ever.

Chris Lighty - we salute you.

BTW check this out. It's the original script to Beat Street and much more honest and truer to the essence of Hip Hop than the more "hollywood" script they finally went with: