Five On The Black Hand Side

As most of you reading this already know, I'm a fiend for 45s. The first records I ever bought with my own money were 45rpm 7" singles from Woolworths back in the days when they only cost 99p each. I must have been about 7 or 8 years old at the time. I don't know why, but as a kid growing up I always assumed that big records (LPs) were for big people (i.e. adults) and the smaller records were designed for smaller people (i.e. children). Don't ask me why I thought that, because I couldn't honestly tell you. But what I can say is that my fascination with little records has never waned and I have constantly purchased, begged and borrowed 45s ever since that time. So of course when the current DJ trend for "everything on 45" exploded, suffice to say I already had piles of heavy ammunition stockpiled in the DAILY DIGGERS HQ.

Hold up though - I ain't dissing those who now favour the 45 when playing in the clubs, putting out their mixes and recording radio shows - quite the contrary. I give props to everyone who is down with the current 45 movement. However there are plenty of us out there who have ALWAYS been making people say "WTF" when we drop a certain little record or two. In this world there are trendsetters and trend followers, but I'm neither of these two. But what I do find fairly regularly in my life, is that subjects which I'm very passionate about often live (for many years) beneath the radar ... until eventually everyone else catches on. The difference is, I will keep doing what I've always been doing, and when these people are bored of the current trend and move on to do something else .... I'll STILL be here doing what I'm always doing.

Good looking out to SKEME RICHARDS (ROCK STEADY CREW) and the HOT PEAS & BUTTA crew for recognising the fact that I've never been a slouch when it comes to my 45rpm business. SKEME asked me to be a part of his "Five On The Black Hand Side" series of deejays showing love for their most-played sureshot 45s. You can see the KID DYNO selection over at HOT PEAS & BUTTA now, alongside 45 selections from DJ PRESTIGE (FLEA MARKET FUNK), SUPREME LA ROCK, AKALEPSE, and NITEKRAWLER and SKEME himself. Damn .... I'm in good company! 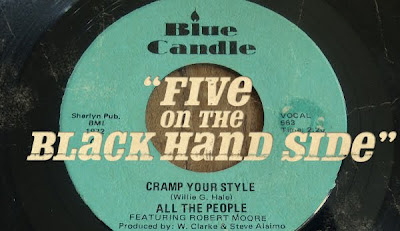 I'm reading: Five On The Black Hand SideTweet this! Posted by Daily Diggers at 15:46