JORUN BOMBAY is back with volume 2 of his amazing ROCK THE DISCOTEK series. If you didn't catch volume 1 then I seriously advise you to grab both of these volumes before you miss them and weep. If you like old school tapes, live performances etc. but was always disappointed with the poor sound quality of these Nth generation copies that were passed around, then THIS is definitely for you. I'm gonna let JORUN tell it how it is......." 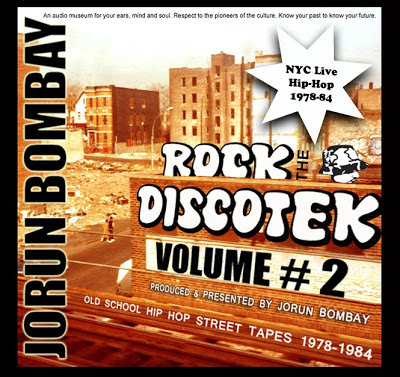 JORUN : "In a nutshell, this is a collection of authentic live recordings from various parties in New York from the early days of hip hop between 1978-1984 and that has been remixed & restored by Jorun Bombay and made into a continuous mix.

These old school live performances are originally from cassette and do not exsist on vinyl format to be mixed in by turntable so i've taken the clips from cassette and mixed the original vinyl breaks over the cassette clips to bring the sound quality up to a desirable level for all sound systems and more less "created" each new recording to be a presentable piece then compiled them all in an order much like a DJ mixtape from that time period in a cut & paste fashion.

Absolutely NO serato, NO Ableton and NO MP3's were used to make this release. All breaks & grooves are directly off of the OG vinyl sources by Jorun Bombay himself. To keep the sound and feel as close to a 1970's bedroom mixtape, i used a stage mic (shure 57) and an anologue space echo when introducing my mixes.
You can actually hear the needle burn and worn out groove hiss in the vinyl to keep it as warm sounding as possible. None of that was digitally restored.

For the most part, the mixes stay in the 1978-84 era but you may hear some influences that go slightly outside of that era (as high up as at least 1987 toward the end of the mix) and that is because the old school influences of the 70's were still being directly felt in 1987. It's still all very relevant.

This is more than a "mix".. it's an audio museum / library for your ears. it's a history lesson teaching the future generations of how hip hop came from absolutely nothing and became absolutely everything & The paths it took to get here. If your kids listen to Hip Hop, let them know where it really came from.

Note : the "bonus" features & clips are not viewable or streamable but come with the download purchase of Jorun's Rock The Discotek Vol 2 as a "thank you" for supporting this release. To hear these clips, you have to pay for the download.
credits"

I'm reading: Rock The Discotek vol 2Tweet this! Posted by Daily Diggers at 17:49

Thanks for the feature & support!