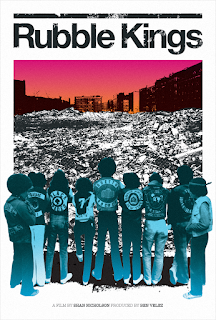 RUBBLE KINGS is an unreleased feature length documentary about the New York city street gangs of the late 60s and 70s and their influence on hip-hop culture. It features interviews with many ex gang members (including the notorious Savage Skulls, Black Spades, Assassinators, Ghetto Brothers, Hitmen etc.) who vividly recall those turbulent times - the urban decay surrounding NYC, the burning of the Bronx, the rise in street violence, and the resulting Hip Hop phoenix that rose from those flames in the Bronx. The project has been a labour of love for RUBBLE KINGS filmmaker SHAN NICHOLSON.
The documentary is already complete but the team behind RUBBLE KINGS are seeking our support through their Kickstarter campaign to enable them to fund the release of the film to the general public. Hip Hop's evolution is an important part of 20th Century's history of music, and lessons can still be learned today from what the gang culture did in the late 70's to help stem the violence (it was time to battle their rivals with b-boy moves rather than with knives and guns!) The change to PEACE, LOVE, UNITY and HAVING FUN saved many lives, and spawned a phenomenon which was spread across the globe.
Take a peep at the short trailer for RUBBLE KINGS and please lend your support where possible in return for one of the rewards on offer on the Kickstarter page.


I'm reading: Rubble KingsTweet this! Posted by Daily Diggers at 17:31