Super Lover Cee & Casanova Rud first dropped on the Hip Hop community in '87 with "Do The James" - a record showcasing the late great Paul C's dope production skills, and undoubtedly they were one of the funkiest acts to emerge from the late 80's. Not only was Paul C definitely ahead-of-his-time when it came to rockin' beats through a sampler and chopping the breaks up to fit tight, but their uptempo party vibe and confident lyrics resulted in some hi-powered hip hop classics! 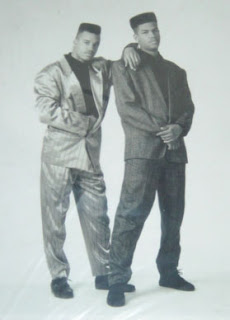 "Girls I got em locked so similar to a prison
in my awesome jams that are causin' me favouritism
I hearda bein' dope and but this beat's a mover.
The choreographer causin your funky dope manoeuvre.
I'm the boss rappin', you're the crowd for hire.
For music supplements the funky drum is your supplier.
Me when on the hiphop I make you get down
and do the James ...Brown"

The duo repeated their early success with "Super Casanova" and "Girls I Got 'Em Locked" 12"s both released on DNA/Elektra, and followed this up with the "Girls I Got Em Locked" LP - a great album, if you don't have it in your crates then shame on you! It's funky from start to finish.

The great thing about their 12" releases was that they all featured an accapella version for the deejays, but I always find it hard to fuck with a great song if it is dope in the first place? If it ain't broke don't fix it knowwottimsayin'?
But hey, it's about time the Super Duo who make girls act "stupid-aly" get the Daily Diggers treatment. To be honest it's raw and was done in one take only so apologies for the odd glitch. I agree it's no Paul C masterpiece, but it's a flip on the original - hope you dig it.