In fact back in the 80's & 90's Kool Keith was Big Shot on ALL coasts. Even now in the noughties there is much demand for him as a guest MC, and not strictly limited to the Hip Hop genre either. The group hailing from the BX left a massive impression on the Hip Hop community, and their releases feature heavily on many collectors' Top 10 lists. I don't know a hip hopper that wasn't bugged out at some point by Keith's flamboyant if not psychotic lyrics. Or a beatmaker that wasn't inspired by the trademark ULTRA sound at some point. 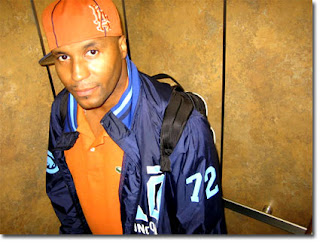 Ced Gee has since revealed that even while recording in the studio Keith would rattle off some bizarre rhymes from the domepiece that defied any kind of logical explanation. Coupled with Ultramagnetic's futuristic beat patterns courtesy of Ced, Moe, TR, and Paul C, they were beyond some next level shit.....I remember first hearing Ultras in '86/'87 and thinking "What the fuck is this futuristic sound??". I thought it was a rap group from the planet Mars or something! It was so different to ANYTHING else going on in Hip Hop at that time. Never before had beats been so cleverly chopped up and re-created into funky patterns. Even now I listen to the carefully crafted Critical Beatdown LP and still think to myself "how on earth did he chop the beats up like that??"

Personally I don't believe Ultras ever improved on their incredible sound during the 1987/88 period. Tracks like "Ego Tripping", "Watch Me Now", and "Ease Back" are firmly secured a place in Hip Hop history. Hell, Kool Keith is now somewhat of a Hip Hop celebrity and recording artist supreme, and has done more collabo appearances on wax than I care to count.
Even after Critical Beatdown I kept a track of the crew from the Bronx and copped their other releases, and Poppa Large 12" was a worthy addition to the collection. It's not the Beatminerz Remix that gets me excited though, but the fact that this twelve inch has an accapella. It brings out my creative side.

Luckily this record was at hand whilst I was messin' with beats this week. I had been checking out a Conroy Library 10" for samples when these sinister stabs popped out! And the drums were procured from Johnny Rivers' "Blue Suede Shoes" LP a few moments later. A quick 2 minute flip on the Akai with Kool Keith lined up on the 1200s ready for the off.....and hey presto we have beats! I hope you dig it.

I'm reading: Just messin' with beats pt4Tweet this! Posted by Daily Diggers at 18:31

Dope, Keith was always on the nex shit. I remember seeing Ultras in Battersea back in 92 and the show was off the hook! KK came out for Popa Large dressed in a straight jacket with two medical orderlies next to him. Whatever happened to those solo albums he was supposed to drop named after the mental hospitals he was supposed to have been in, or was that just urban myth?

Hearing that remix makes me want to dig out my old 12" and do my own version.

ha ha Downstroke I love the story re: Battersea. Shame I missed that show back in the days cuz it sounded crazeeee d-d-dope!

I remember the rumours about Kool Keith checking in at the mental hospital - that spread so far and wide! Perhaps there was some truth in it.

I look forward to hearing your Poppa Large REMIX.

"One Cylinder" is a fave of ours too. Lou Donaldson is the man!

If it's on vinyl then it's fair game when it comes to beat fodder!

stay tuned for more of the raw.

actually its 'big shout' on the east coast

thanks bro for spotting that typo - but how come no-one else spotted it? DOH! Finding enough time to compile these posts is kinda hard, and even harder to be able to proof read everything. Thank God it didn't say "Poppa Large - big shit on the east coast"!!!
I don't think Kool Keith would have been too impressed!

Finally got round to doing doing my Papa Large remix I promised 18 months ago, ha ha!

It's up on my myspace which is: www.myspace.com/up4thedownstroke