Take out my duster! 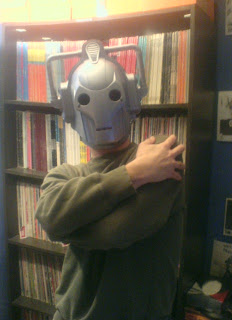 A few people have asked us who are Kid Dyno and the Beat Detective?? Do we know them? Would we recognise them?? Have we seen them around?? We try not to be too secretive so here's a photo of Kid DynO so you know who he is when he nudges you out of the way at the record fair! And what better introduction than a quick soundclip straight from the Dynolab. We reckon you will have a better idea of who he is after hearing it.
Now as for the Beat Detective, he's a hard one to catch on film. Well, with a name like that you wouldn't expect him to expose his identity now would you??
Maybe we will catch a flick of him later? Who knows....?

Now you know...
I'm reading: Take out my duster!Tweet this! Posted by Daily Diggers at 19:49

Ha ha - nice to see the "posing in front of record collection in a Cyberman helmet" trend is growing.....

LOL! ha ha Pete with a face like mine it needs covering up!

Nice to see the Diggers with Gratitude regulars passing thru...

Thanks for checking us out - if you've got any requests just holler!