THE DIARY - mo' bounce for yo ounce!

Over the last few years we have heard many "mixtapes" which don't seem to do what they claim on their own packaging - they don't mix! Obviously a mixtape should be, as the name suggests, a mix of tracks carefully blended to keep the listener hooked to the music throughout. It's surprising how many tapes and CDs feature no mixing or turntable skills whatsoever and this has often baffled us, compared to the deluge of mixtapes that were available throughout the 90's when every deejay wanted to showcase their skills on the 1s and 2s..

So when we heard that CHRIS READ of SUBSTANCE was putting together a mixtape to beat all other Hip Hop mixtapes, entitled "THE DIARY", we just had to find out more.... 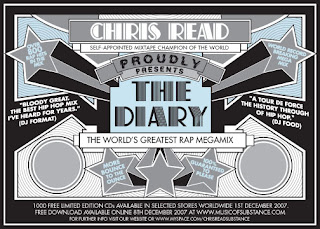 At first we were reliably informed that there would be over 500 records featured in the finished mix - surely this couldn't be true? Could it? But then we got lucky and CHRIS himself played us a tasty snippet of the semi-completed mix when he visited DAILY DIGGERS HQ for Record Rehab several months back. And straight away we realised we were witnessing something pretty damn special right there - the 5 minute teaser we heard left us salivating and foaming at the mouth, yearning for more of the same. What we heard was tight - real tight.....and I mean TIGHT like a new pair of jeans! This robust and confident style seems to be CHRIS's trademark (you know his steez!). The five or ten minute extract we heard was very well thought-out & had us speculating on what was coming next in the mix - and we liked it. In fact we liked it a lot!

With over 800 records thrown into the blend, the mix’s record-breaking status will undoubtedly capture attention of those within the Hip Hop community and those on the outside. Despite the tongue in cheek claim to be the “World’s Greatest Rap Megamix”, this release serves to document an important period in the history of modern music and should certainly not be dismissed as mere novelty.

Chris Read has for 12 years been resident DJ and promoter of ‘Substance’ - one of the UK’s biggest and longest running Hip Hop, funk and soul club nights. Chris has also spent two years as mix show DJ on the BBC’s station for ‘new black music’, 1Xtra.

Plus over those 12 years his nights have featured some of Hip Hop's great performers (incl. KRS One, Dj Premier, Marley Marl, Busy Bee (see photo), Masta Ace to name just a few) as well the DMC mixing championship heats. If there was an annual Hip Hop Club awards ceremony Chris would undoubtedly be nominated for hardest working promoter and DJ - he puts mad work into this culture. For more details of his antics over the years check out musicofsubstance. 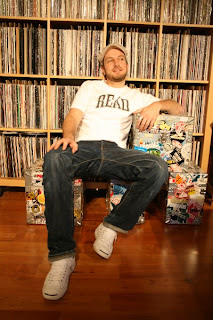 material devoid of originality pandering to the near cartoonish stereotypes expected of them by the major labels. Conversely, true exponents of the genre have been driven to take the music in new directions; Hip Hop music has made the unique achievement of reaching an all time creative low and all time creative high at one and the same time. There has been no better time to remind the world of the rich legacy of rap’s 28 year recorded history. CHRIS READ's latest mixtape epic “THE DIARY” does just that.

This jaw droppingly intricate mix chronicles the genre’s landmark recordings in order of release from 1979 to 2007 (no mean feat in itself) and has been quick to gain support from some of the world’s best respected DJs and taste makers;

“A tour de force through the history of hip hop. A unique view of hip hop’s golden moments”

(DJ Food - Ninja Tune / Solid Steel)
“Bloody great! One of the best hip hop mixes I’ve heard in years.” (DJ Format – Genuine Records)
“An amazing piece of work!” (Mr Thing – Former World DMC Team Champion)
“This mix is bananas! F***ing awesome! The best and some more” (Marc Hype – Former ITF Champion) To attempt to give you a track listing for THE DIARY would be a complete nightmare, but somehow CHRIS has managed to complete the mix AND provide a complete track listing for it. This must have taken months, even years. I'm not about to list them all right now, but suffice to say if you like ULTRAMAGNETIC MC's , KRS ONE, GANGSTARR, LORD FINESSE, DE LA SOUL, RUN DMC, EPMD, AUDIO 2, 45 KING, KOOL G RAP, NICE N SMOOTH, PUBLIC ENEMY, LAKIM SHABAZZ, JUNGLE BROTHERS, NWA, CASH MONEY & MARVELOUS, LONS, ATCQ, LOTUG,...phew that's only the 80's covered but I'm sure you catch my drift!! Recommended listening for all Hip-Hoppers - cop it or live to regret.

Both old school heads and Hip Hop fanatics alike will be screaming "I know this one" as each tune drops on their unsuspecting eardums, but only the true aficionados of the culture will be able to name them all (and even they will struggle!). And it wouldn't surprise us if a few of the gems hidden away on THE DIARY mix will also keep a few cats asking questions like "what is that shit?? I need that record." We've added a lil soundclip below to give you a taster of what this mix is all about. But to catch your very own copy of THE DIARY could not be any simpler or any cheaper...

* also 1000 FREE CDs will be available through these outlets below...

Plus a transmission via satellite on the MAIN INGREDIENT Hip Hop Radio show with our good friend DJ CRO on Dec 3rd at midnight.

And what better way to start things off than with a LAUNCH PARTY!! This Wednesday (28th November) sees the THE 80's DIARY SESSION at the DRAGONBAR in Leonard Street East London (nr. Old Street Tube Station) with FREE admission. Our very own KID DYNOMITE (DAILY DIGGERS) will make an appearance on the wheels alongside CHRIS READ on 28th with some killer Hip Hop classics from the back of the stack - so if you're in the mood for reminiscing on the Old and True School then get yourselves over to the DRAGONBAR. It's gonna be FRESH TO DEATH! This is just the first of four DIARY SESSIONS, and there will also be a 90's SESSION to follow on 5th December for the Boom Bap professionals out there amongst you. We look forward to seeing ya there!

And don't forget the 20th December 2007 for the DIARY SESSION featuring world-class turntable action from DJ Babu & Mr Thing. OOH OOH OOH!! It doesn't get much better than this...

KID DYNO
I'm reading: THE DIARY - mo' bounce for yo ounce!Tweet this! Posted by Daily Diggers at 13:04

AWESOME! 800 record mix!!?? sounds amazin, thanks for the cool snippet.

it's all gravy! Keep your ears open for the full mix dropping very soon on the Substance website, and it's FREE to download! Nice one Chris for spreading the love! Nice one Sportbillybreaks for appreciating it.

Just copped the download and my jaw has hit the floor. That's one of the dopest mixes I ever heard! My only (minor) gripe is there was not enough mid 80's bangers on there (no Roxanne Roxanne!) unless I got distracted for a few seconds and missed it. Kind of reminds me a bit of my old pause button mixes, but way doper! Mad repect to Chris Reid, your shit is legendary!

Just copped the download and my jaw has hit the floor. That's one of the dopest mixes I ever heard! My only (minor) gripe is there was not enough mid 80's bangers on there (no Roxanne Roxanne!) unless I got distracted for a few seconds and missed it. Kind of reminds me a bit of my old pause button mixes, but way doper! Mad repect to Chris Reid, your shit is legendary!