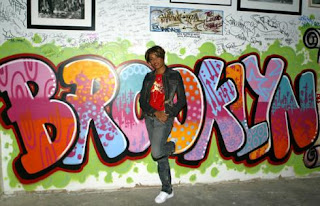 We love girls. And we love Hip Hop. So it stands to reason we love girls into Hip Hop. So we raided the crates for our favourite records with female MCs. It wasn't that hard to be honest - maybe you forgot that the girls got it goin' on! Just a quick peek through our crates reveals wax from the gorgeous MC Lyte (above), Roxanne Shante, the sexy but obviously hard Antoinette, Sweet Tee, MC Peaches, MC Pre-Sweet, Sparky D, Ms Melodie, Bahamadia, Ice Cream Tee, Queen Mother Rage, Monie Love, Dimples D, Isis, Big Lady K, Salt n Pepa (pre-commercial wackness), and I cannot forget her royal highness Queen Latifah (remember the Paul C & 45 King mix of "Ladies First"??) Ayway let's get down to business and pull out some favourites...

the other more-noted male MCs of the time. At a tender age she was throwing down her lyrics at the park jams of the late 70's & early 80's and became a member of the Funky Four plus One along with DJs Breakout & Baron, Jazzy Jeff, Lil Rodney Cee, KK Rockwell (original member Rahiem left to join the Furious 5).
The young SHA-ROCK use to live between homes in the Bronx and Harlem. Back in the 70's she would sneak out of the house and go to Kool Herc's infamous parties, despite there being no female MC'S at the time. At first she did her thing as a B-Girl, and just like the fella's she would wait for that certain break part of a record and then begin to hit the floor. 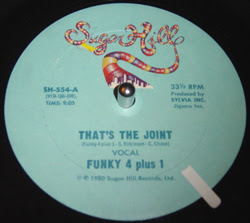 But after seeing a multitude of male MCs, she strived to become the first girl to grab the microphone and represent the ladies in the house....and she also succeeded as the first Female MC to become a part of an all-male Hip Hop group namely The Funky Four Plus One More. SHA also became the Bronx's first girl on the mic to go full circle in an MC battle, and first female MC to use the echo chamber behind her voice, and even appeared on Saturday Night Live with Blondie in 1981. And you better believe she could compete with the guys just as well as the girls! Check out how SHA-ROCK holds her own in the soundclip below from Funky Four Plus One "That's The Joint" from 1980 (yes 27 years ago!). Here she sounds as much a part of the group as the other MCs. Classic stuff.

"Man your battle stations I'm ready!". Another flygirl on the mic is a constant favourite here at the DAILY DIGGERS HQ. ANTOINETTE was one of Hurby Luv Bug's proteges signed to the SOUNDCHECK label, and we have to give props to Hurby cuz he did give this girl some of his funkiest raw beats! ANTOINETTE's rhyme style was hard and heavy, and she came across as a confident MC with her ill flows and punchy yet slightly nasal sounding voice. Very often she was referred to as the female equivalent of Bid Daddy Kane, and she even got the Juice Crew's seal of approval on that when recording "Raw Attitude" with BDK - a clever male-female combo fusion of their individual hits.

Boy, you WOULD wanna kiss this honey but you would NOT wanna get dissed by this honey! When she wants she can spit out some scalding rapid-fire rhymes. Her first and in our opinion best appearances came on the Hurby's Machine (House that Rap Built) LP in 1987, and the subsequently released "I Got An Attitude" and "Unfinished Business" 12-inch releases on SOUNDCHECK RECORDS. 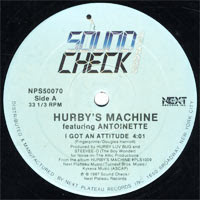 "Ducks, halfspins, I'ma show them all
I'm not a joker, but I laugh, cuz y'all can't brawl
I roll....the mic smokes.....I lay it to rest
Embalmed in my palm, I touch it and it's blessed
Got style...I know the routine
All punks popping junk can't join my team
I got an attitude!"
Below is a soundclip from "I Got an Attitude" from 1987. Killer drum sequencing by Hurby I'm sure you will agree. And under that is a snippet of "Raw Attitude feat Kane taken from Mr. Magic's WBLS show." As the man, the icon BDK would say...."Come get some, you little bum!"


Now whilst the First Priority Music posse had the gorgeous MC Lyte (have I said that already?? LOL), the JUICE CREW had its very own MC GLAMOROUS. As far as we know, she first appeared on the JUICE CREW ALLSTARS self-titled track in 1987 on Cold Chillin'. Although a b-side track, it's a must-have classic posse-cut featuring the mic talents of Kool G Rap, Craig G, MC GLAMOROUS, MC Shan, MC Percy (Tragedy the Intelligent Hoodlum), Roxanne Shante and of course Marley on the boards. 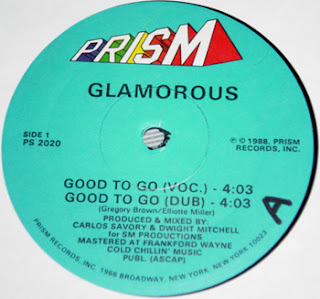 This was their first posse cut before concept of "The Symphony" had even been dreamt up. MC GLAMOROUS (real name Maya Angelou) also featured on the A-side cut "Evolution" alongside T.J. Swann's trademark vocal delights.
But for us the standout release from GLAMOROUS is the lesser known and fairly sought after PRISM RECORDS release entitled "Good to Go". Put out in 1988, when Glamorous was still a Juice Crew member but no longer produced by Marley Marl. However this record is a stormer - a dope horn sample and a funky drum pattern with a sporadic break loop tucked underneath. Her vocal delivery even resembles Antoinette at some points. Great stuff Glamorous, but why can't we find a picture of you anywhere??

p.s MC LYTE if you are reading this we LOVE you!! xx
I'm reading: Girls Got It Goin' On!!Tweet this! Posted by Daily Diggers at 15:24

send me your GLAMOROUS 12" now!

Antoinette was HOT! I still need that album damn it! Any spares??

Big C - NOT fit - i don't think. Short career. But she could rock the mic, most notably on 'Look Alive' from the D+D ALLSTARS 95 LP. A femcee who hardly gets a mention probably due to lack of material maybe?.

MC Lyte was dope - 10% Diss blew me away, those drums! the voice!..aargghh.lol

Let's not forget... Hurby seemed to have got his "Impeach the President" tap out beat idea from the Audio Two's "top Billin'," which was explained in MC Lyte's diss to Antoinette, "10% Diss," which cracked on the beat biting of Hurby and the phantom rhyme writting of Hurby for his female acts at the time, thus Antoinette's lack of real rhyme skill.

^^ true, Hurby did bite the Audio Two drum style, but I gotta admit I didnt realise that he also ghostwrote Antoinette's rhymes. That has kinda burst the "Antoinette" bubble for me.....

many thanks for your informed contribution, I hope you continue to visit BREAKS FOR DAYS and next time please would you add your name and where ya at-at-at so we know how far we are reachin'?

Hey Kid Dyno! Sorry I posted anonymously about the "beat biter, dope style taker" earlier. I was in a hurry, and I could not log on with my blogger name. I am from Fayetteville, NC. I had Glamorous on a WBLS Rap Attack tape with DJ Kevie Kev, but a friend borrowed it and then loaned to somebody who did not return it when he moved. Hurby was the man, writing the early hits for Salt-n-Pepa. They started writing their own stuff when they broke away from him. Well, I am outta here again.

Ceemix - what's up my mellow.

Thanks for dropping back in, it's great to see real heads up on here.

That Glamorous joint was really underplayed back in the day, and now makes big money cuz heads didnt buy it in 1988. I found a cheap one about 3 years ago and purchased it "blind", so I wish I had heard it on WBLS back in the day. Kevie Kev knew the time! dope beats!

I also love the SUPER LOVERS track from the HURBY's MACHINE LP - remember that?? Another Hurby sureshot.

Check it... I HAVE that album. HEHE. Man, I think you and I could "waste" days comparing notes and reminiscing about the REAL days of hip-hop... I ain't into the current school of crap out there.