The Artifacts Live in '94

Now it's time for some LIVE ON STAGE action. To be completely honest we have been inspired so much lately by Phill Most Chill's excellent "THAT REAL SCHITT" blog and the amazing old school tapes he's been dropping lately (that's a legend teaching us about legends right there!). So we thought it's only fair to share a little of what have stashed away on a well-chewed up cassette tape somewhere at the bottom of a dusty box marked "NY 1994"! 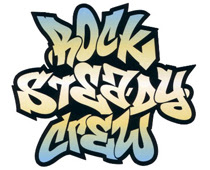 Our first offering was recorded in July 1994 at the Rocksteady Crew 16th Anniversary Jam in New York at the now famous "Rocksteady Park". Hosted by RSC's very own Crazy Legs and Kool Bob Love aka Bobbito the Barber, this anniversary jam had brought together some great names for live appearances including Lord Finesse, Kurious Jorge, Rocksteady Djs (Qbert and Mixmaster Mike), and KRS One to name just a few.

But Rocksteady Jam 94 also saw The Artifacts take to the stage at a time before their "Wrong Side Of The Tracks" 12" had dropped on the masses, and they were only just riding on the back of the success of the Nubian Crackers release they featured on. Have a listen below to THE ARTIFACTS LIVE AT ROCKSTEADY '94 and let us know if you like it, and maybe later on we will post more archive recordings of other artists at the anniversary jam??? Tame One and El Da Sensai's set is f#cked up at first with sound or DAT problems, but hold tight and witness the Boom Skwad eventually rip shit!
Later that very same day, the Lord Finesse appearance was pretty amazing as he performed accapella.............and you could hear KRS laughing backstage at his hilarious yet predictable Michael Jackson diss. As a young Hip Hopper from the UK it was spine-chilling to witness the Funkyman do his thing live. Also there was an early appearance on the mic by Zulu Gremlin. And Mixmaster Mike rocked his set despite a needle snapping half way through. But I haven't posted those clips up yet, please drop a few comments if you dig it and we will keep our word and post some more goodness for your domepieces.