Once again we're back at the Rocksteady Anniversary in '94. At the time, the re-union was held outdoor in a ballpark just off Amsterdam Avenue and 98th in Manhattan (Uptown). 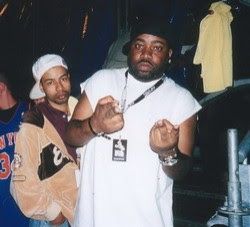 Known as "Rocksteady Park" because of its affiliation with the RSC over the last 3 decades, this park has seen some events! Although to be there in the day you would never realise its place in hip hop history - it looks like any regular NY ballpark.
The RSC Anniversary also had an indoor event planned in the Manhattan Centre later that week, with the highlight being DITC on stage, as well as Q-Bert and the Rocksteady Djs (as they were then known) performing their live routines. This was due to be hosted by the Funkyman Finesse himself, but would he arrive at the park to do his thing??

We had seen several MCs take the mic, including Fat Joe, KRS, and a fresh-outta-Cali Alkaholiks crew who threw cans of beer into the crowd!! But the rumours were Lord Finesse was gonna drop a verse or two. Needless to say we were'nt disappointed.

You can even here KRS One laughing in the background on several occasions. Finesse chose to rip the mic accapella....and although you will recognise the rhymes he drops, this was possibly the first time he had busted 'em live.

I'm reading: Lord Finesse kicks it accapellaTweet this! Posted by Daily Diggers at 20:21

The Grand Imperial Funkyman Lord Finesse! Can't go wrong with hungry street rapper on the mic. Thanks for this classic diss of the Lords of the Underground....a must have for any Lord Finesse fan.

yo ive been tryin to find a copy of this freestyle do you happen to have a link i could download it from?

Just one quick thing, this was from 1993 not 94. Man, I was there to witness this. It was incredible! Outstanding site you guys definitely one of my favorites. I just downloaded one of your mixes so I'm gonna chill and peep it...

yo bruh, hit me up on the cakemail@gmail.com..... i need to get atcha bout summat