Here's a few more essential disco biscuits guaranteed to fill any dancefloor and make every b-boy and b-girl in town wanna get down.


ATMOSFEAR - "Outer Space" (ELITE dist. through MCA '79)
This is actually the b-side cut from "Dancing In Outer Space" (which entered the UK top 50 in 1979) and features on the flipside of the twelve inch release. 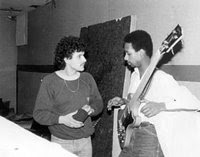 Perfect for b-boys as the drums are more in-your-face and the breakdown part is absolutely insane! The build up is so clever that when it reaches the peak it makes every ageing b-boy wanna throwdown on the linoleum.
ATMOSFEAR were a UK group based in London, founding members include Jerry Pike (Percussion & Sound Effects), Lester J. Bachelor (bass), Tony Antoniou (lead vocalist / rhythm guitar), Raymond Johnson (drums). Pike was also the manager of the ALL EARS Record shop in Harlesden, so the group 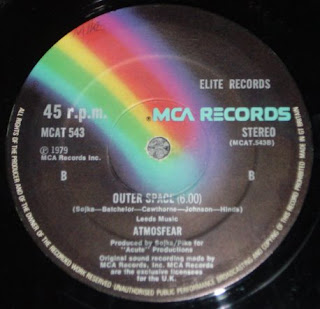 could also practise at the back of the shop. He brought in his friend, Lester Batchelor, who played bass. The group released this, their debut single, on MCA in 1979 - the bassline was particularly notable on the tune and was played by Bachelor on a Gibson RD Artist bass that he bought from Gibson whilst working for the company. The bass had a built in moog synthesiser and only 10 of them were made, and Bachelor later had his stolen. 'Dancing In Outer Space' sold 100,000 copies and is frequently sampled. Atmosfear continued to record throughout the 80's but never revisited the pop chart.
Thanks to DJ Leacy and Aidan Orange for first schooling me on this joint! 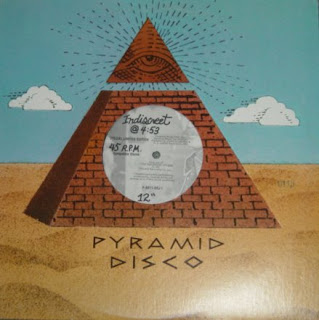 an edited and extended break section compared to the version that appears on the "The Tea Dance" album. How fantastic that way back in 1977 before sampling technology was available they thought to extend the favourite break section, even adding a "JAZZY JAY" type stab at the end of every couple of bars, giving the impression of a DJ doubling up the music! It is hard to tell whether this was re-recorded, or whether some heavy tape-splicing was going on but the effect is great - have a listen, it is incredible shit no doubt. This makes this twelve a must buy if you can track one down. But it is not easy to find by anyone standards...but I'm sure the eagle-eyed diggers amongst you will have your sources LOL! Props to my brother from another mother SKYE for helping me out with a copy.

EASTBOUND EXPRESSWAY - "Never Let Go" (AVI '78)
Now this record demonstrates the "dark grooves in the vinyl could be a break" theory to the fullest. Any serious beat digger knows that on some records, 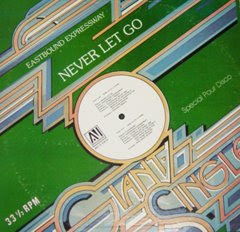 a lighter or darker section within the groove of a track can indicate a possible break part. Now this theory is not 100% accurate...but on this little beauty the theory comes up trumps. At a length of over nine minutes, this disco anthem has the opportunity to breakdown 3 separate times, and the grooves on the wax show this clearly in the photo below. For me the second breakdown is the best with its dual-tone wood 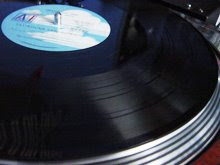 blocks punctuating the rigid yet funky disco beat. OK so the lyrics are a little repetitive, but nevertheless this is a bad-ass disco 12". I'm not aware if this record has been sampled by any Hip Hop artists (please tell me if you know any) but if you listen carefully on checking out your old school tapes, no doubt you will recognise this beat being dropped here and there by the pioneers.

Nice, this post is loaded with goodness - thanks for sharing

Great break! I have 2 copies of the never let go joint.