It's suprisingly easy for a beat digger to find breaks or samples when collecting records, mainly because there have been so many hip hop artists using different samples as the backbone of the music in their records. Don't get me wrong I ain't saying this diggin' shit is easy, cuz it certainly ain't......and the record knowledge needed can take years to amass (hell I'm still learning after 20yrs!). And some of the dopest breaks I accept are rare as hen's teeth and we ain't never gonna find those even with all the record spots available; but I guess what I'm trying to say is that there are so many records out there that have been pillaged, the chances of finding something sampled is quite high. 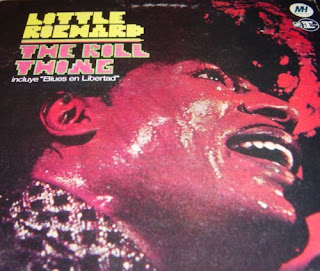 But sometimes an unexpected gem can turn up in the most unusual places. As I have mentioned before, every music genre can turn up some classic samples from the past, and even the most surprising of artists...e.g. ELVIS, BRYAN FERRY, LEVEL 42, KENNY ROGERS, ZZ TOP, SERGE GAINSBOURG have all at some time provided the samples or breaks for both DJs and Hip Hop artists.

Although even I wasn't ready for this next record. I had checked out many LPs from the same artist with fruitless results. But then a little investigation lead to a nice find for a tenner (£10) on a recent mission - LITTLE RICHARD's The Rill Thing LP.

There are certain breaks that need very little other than looping up, add a couple of dope MCs with some on-the-point lyrics, and hey presto you have a great hip hop track. But to make a classic hip hop track you need something a 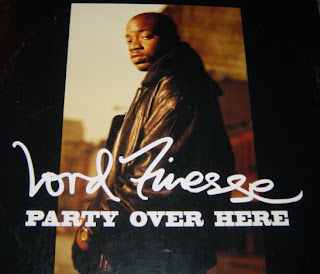 little special.....or maybe take a killer beat and someone really special. So say if we take LORD FINESSE and BIG L for example. Let them drop their sh!t over a looped up and seriously funky LITTLE RICHARD beat (track is also entitled THE RILL THING) and you have "YES YOU MAY REMIX" which features on the flip of PARTY OVER HERE 12". This track may be simple but is so effective at showing how much mic skills these dudes have. The track still holds its own today as do the 2 MCs rhymes. And rest in peace to BIG L, self-promoting braggadocious rap ain't the same without ya!

Here's a clip of THE RILL THING and YES YOU MAY remix...


[ Lord Finesse ]
Yeah, now check this out.
Now what we have here is the "Yes You May" remix, right?
But Percee P and my man A.G. ain't here,
and I got my man Big L in the house, you know what I'm saying?
And we swinging shit for '92

[ Big L ]
Ah check it out, yo
Ayo everywhere that I go, brothers know my f!cking name
I'm flooring ni##as and I only weigh a buck and change
I gave a lot of black eyes in my extorting days
F!cking with me, a lotta ni##as was sporting shades
I grab the microphone and scar jerks
N#gg#s running up (Put me on!) What the f!ck, is this star search?
I'm relieving rappers like Sudafed
And if the microphone was smoke then Big L would be a buddha head
Ayo my crew's real smooth like Lopez
I was rocking mics since ni##as was wearing Pro Keds
I only roll with originators
Chicks stick to my dick like magnets on refridgerators
I'm a crazy mean lyricist
Many are in fear of this, yeah, so they stand clear of this
And those that refuse the order, Big L bruise and slaughter
Ni##as hear me and take notes like a news reporter
I'll bend a rapper like a fender, I'm slender, but far from tender
Killing ni##as like a Klan member
You can't touch this, your rhyme's to darn weak, front
And I'm a introduce your brains to the concrete
I keep hoes satisfied, I'm pushing the fattest ride
To take me out, troop, even the baddest try
But they fell cause my techniques are liver
I'm so deaf I need a hearing aid with an equalizer
You tried to hit a home run but you struck out
My rhymes were released, I'd like to say peace the f!ck out

[ Lord Finesse ]
Check it out, it's the brother you have to
hear, stand up, clap, and cheer
As far as running mine, ain't nothing happening here!
Cause I'm on some ruthless shit
It ain't over til the fat lady sing? I'm a shoot the bitch
I'm swift with this, it's ridiculous to get with this
When I kick some shit, I'm a cold flip the script
It's all systems go when I start ripping shows
I swing and do my thing and I'm coming home with different hoes
I got game like Genesis
When I finish this I can bag any hoe on the premises
I spin into action like a whirlpool
Get wilder than a rapist in a Catholic all-girls school
Cause I'm scoring mine, never kicking boring rhymes
I'm living larger than my dick in the morning time
I get paid and laid on a good night
Me take a loss? That shit don't even look right
Brothers couldn't win against me with their hardest tactics
I hang 'em and use their ass for target practice
If you think you can troop, go recruit your team or group
We can battle for some loot, shit
I take you, and plus the rest of your squad
Bust your ass and make you all get messenger jobs
So write that shit in your column
Any rapper who wanna beef, motherf!cker got problems
I'm out to make changes
It's the Funky Man, you know what my motherf!cking name is!!

Kid Dyno
I'm reading: The Rill ThingTweet this! Posted by Daily Diggers at 20:35

Man I love to read "The Daily Digger"...how do I get on your blogroll? I have a blog and would like to link to yours. I will also link you to my page on www.grandrapidshiphop.com

Yes the breaks and beats you find are just too ill!!