The heavy beat-diggers out there amongst you will know the name DANNY DAN THE BEATMAN. Either from his brief appearance in the short movie THE FUNK HUNT (where he takes a headbutt for his records!), or simply for being a legendary bronx veteran with an incredible arsenal of dope ass breakbeats - there's no denying this cat's qualifications.

DANNY DAN grew up in the early days of Hip Hop and had already begun to DJ Funk, Soul and R&B from the age of 13, but was later influenced by the legendary KOOL DJ HERC to become a drum break junkie. He was fascinated by watching him spin two copies of the same record mixed seamlessly back-to-back.
He hailed from the Bronx 183rd street, and in this area DAN and his crew would rule the streets from 1975 to 1984 involved in organising and spinning at street jams, 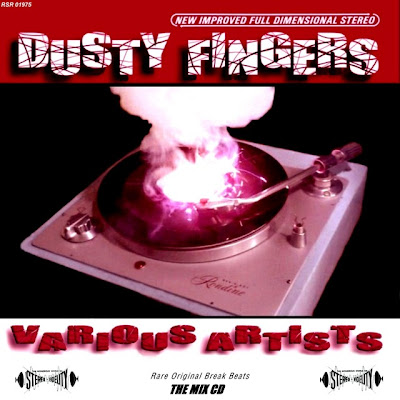 It can be argued that DUSTY FINGERS was the first breakbeat comp to continually go beyond the well-travelled world of LENNY ROBERTS's much revered Ultimate Breaks and Beats series. I'm sure many of you will remember how DUSTY FINGERS was very much shrouded in mystery (is it Diamond D?). DAN made a quantum leap in the digging world, introducing many to euro-breaks, badder than the original cover versions, and also that elusive genre known as library records.

"For the first time DANNY DAN THE BEATMAN has been commissioned to create a mix from the series. With such incredible source material, it'd be hard to fuck this up, but Dann does an excellent job playing guide through the now massive catalogue. There's 57 tracks in total, with just enough editing (tracks average about 1:30 in length) and nicely timed doubles. Well over an hour of music." - Turntable Lab

and also one of DANNY DAN's productions from 1994 on NOO TRYBE Records...
DOO WOP & THE BOUNCE SQUAD - Hit 'Em In The Head

We caught up with DANNY DAN THE BEATMAN for a hot minute and threw a few beat diggin' questions at him...

DD: Our boy DJ LEACY (RIP) used to keep his break records secret until he had doubles. Do you do the same??
DAN: yes but when i get doubles it over i play them for a good 6 mouths then i will give out the name. I met DJ LEACY once, he was a cool cat may he rest in beats.

DD: What's your most memorable dig?
DAN: i had many but one time in the 1980 i found a box of soul by soul lps in a warehouse in new Jersey for only one dollar a record.

DD:You have 10 bucks in your pocket - do you hit Burger King or go hungry and buy some flea market bargains?
DAN: go hungry many times records are more important to get now because you leave it its gone.

DD: What's the biggest one that got away?? (i.e. left it in the shop)
DAN: the biggest one was 2 copies of willie dynomite back in 81. I need fresh copies but they got away, only 10 bucks too damm!

DD: Describe a perfect drumbreak?
DAN: The perfect beat to me is Niagara drums - its just has everything in it funky.

DD: Is there a DUSTY FINGERS Volume 2 in the pipeline??
DAN: I don't know yet but its something I might do soon.

DD: Many thanks Dan you are an inspiration. Please would you hit us off with your top ten drum breaks of all time?
DAN: Sure...


For DJ bookings, interviews etc.. you can contact DANNY DAN at theBeatMann at yahoo dot com or through MYSPACE.


THE FUNK HUNT pt2 (immediately you see DANNY DAN cutting up 2 copies the way it should be done!!

You've been getting real busy with the dope posts recently boys. Good work. Maybe I should quite f*cking around with the stupid sh*t and put up some serious beats and pieces.

By the way Dom - you owe me a tenner. Good Fortune came in 4th. Just send me that spare copy of the Mecca Instrumentals if you want.

Thanks 4 that interview dogs....I copped this C.D. a couple months back, and was very humbled by hearing so many gems that I have never heard before..
I have been digging hard since the mid 80's, but "Dan The Beat Man" caught me off guard with his shit......Anyway, keep up the good work on this blog..
Peace from Vietnam California, Drasar Monumental www.hiphopbattlefield.blogspot.com UZN/NS

the funk hunt is ridiculously dope!

DJ Danny Dan how easy we forget the one's FROM 192 ST. IN CRESTON AVE DO YOU REMBER WHEN YOU USE TO COME TO MY HOUSE TO DJ ON MY EQUIPMENT BEFOR YOU GOT YOURS WITH THE 45'S WHEN SLAM 2 BROUGHT YOU TO MY HOUSE AND WE USE TO HANGOUT WITH BUCK,RIP7. AND YOU DIDN'T EVEN SHOUT ME OUT... FROM DJ JOEY JOE WITH THE PATCH OVER THE RIGHT EYE..