Sad news this week - the death on December 4th of DITC affiliate PARTY ARTY from "health complications". Best known as being down with AG, BIG L and LORD FINESSE for years, and also 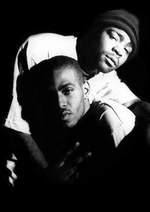 being one half of the crew GHETTO DWELLAS with D FLOW as the remaining member. We here at the DAILY DIGGERS HQ, have always liked his gravely tones and, his hilarious appearance whilst taking a dump in the SBX video, and for killer lines like this....

"enough weed for ten blunts but I stuff it in one!"

Many of you will have also seen PARTY ARTY's appearance on the dope SBX DVD released in 2005, where he performs the grimey bronx joint "Everyday". But few will be aware of how PARTY ARTY could hold his own in an emcee battle. Of course growing up in the Bronx with the likes of AG BIG L etc.. the skills are gonna rub off eventually, and ARTY was yet to reach his prime as an MC. Hence it is a sad loss for the hip hop community, and he and his rhymes will be sorely missed.
Check out some footage of his battle with MURDA MOOK...the footage may be poor but ARTY's freestyle was 100% in E F F E C T!

PARTY ARTY featured on both BIG L's debut LP "Lifestyles of Da Poor & Dangerous" and also dropped science on SHOWBIZ & AGs "Got the Flava" way back in '95. DJ PREMIER has also expressed his sadness at this loss, and reminisced over AG's "GET DIRTY" LP studio session (for which PRIMO produced the cut "Weed Scented") where he worked with PARTY ARTY......no doubt the man had some serious skills. If you don't already consider yourself a fan of PARTY ARTY's lyrics, just take a listen to the following tracks and I'm sure you'll change your mind.


"Hold It Down" feat AG, PARTY ARTY, & A BLESS on DITC presents THE WILD LIFE EP produced by SHOW

It's weird as I was only listening to that new(ish) DITC joint this week too. Watched my SBX DVD this morning to pass on my condolences, then stumbled across Unkut.com and read Robbies R.I.P.

Rest In Piece P-80, you'll be sorely missed in these ears.

That's really sad, I didn't know anything about his passing... He will be remembered by the Kool Skool for his Toilet Stoolrap in the SBX. Hilarious shit (ho-hum)!
R.I.P.

That's messed up! I never even heard about this. He will always be remembered for his Toilet Stool Rap in SBX though, that shit was hilarious (ho-hum...)He is tearing chunks off of Mook above!
Peace as always $