I just can't get enough breaks on 45. Those that know me will confirm this obsession I'm sure (thanks Oxygen for the recent funk batch from across the pond!) Some of the pressings are so chunky on 45rpm that they sound better anyway compared to the quality of LP versions played at 33 and a third RPM. Hence a better sample to rip for my own productions. A great example of this is RUFUS THOMAS's classic drums on THE PENGUIN PT2. - every LP version I own sounds flat, even muffled. But the 45rpm 7" is crispy and the drums are so loud!! You can certainly notice the difference when sucking this into your AKAI or SP1200 or whatever. More BOOM BAP than boom bap.

So to wet your appetites, here's a random selection of funky 45s from the DAILY DIGGERS crates.

RAY CHARLES ORCHESTRA - "Booty Butt"
When you listen to this clip I'm sure you will find this track instantly familiar. If you can't guess it straight away I'm sure the answer will come eventually, if you know your Hip Hop! This dope little record on the TANGERINE RECORD CORP label is a nice find, but unfortunately not dated. 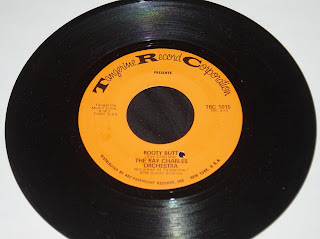 The mood is mellow at first, with some cute little guitar licks and mellow bluesy piano scales, but the bassline deep in the background is damn funky and so hypnotic throughout! But my favourite bit starts when the sleazy horns come in. RAY CHARLES is showing his bad self on this track, but the sax player is the star of the show with his expressive rasps! Later there is a nice guitar solo too, and some whoops and howls thrown in for good measure. Get on down!
I've also added a clip of the much loved Hip Hop track that uses the piano and guitar licks.
Booty Butt

THE VILLAGE CALLERS - "Hector"
Nice white label promo copy of this RAMPART release (same label as FRISCO DISCO). These are some hectic live drums here, and a joint used by, amongst others, CYPRESS HILL on the track "The Funky Cypress Hill Shit". I love the sporadic drum intro, and the crowd noise and laughing 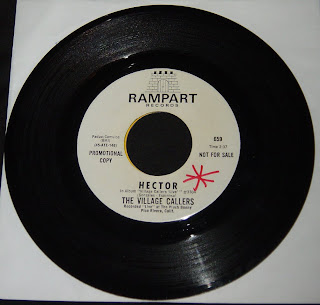 in the background (this was recorded live at the Plush Bunny club in Pico Rivera, California). The drum break is kinda noisy because it's live, and after four beats of bongos the guitar licks come in and subsequently the hammond organ takes off. But it is the sinister horns that make this joint a winner. A dancefloor killer, and essential jam for any funk party.
From memory, DE LA SOUL also used "the HECTOR break" as it is known, as did ICE CUBE on "Jackin' For Beats". If you don't believe me, go and give it a spin.
Hector

BIG JOHN HAMILTON - "Big Bad John"
I have to be honest I only copped this 45 recently, after finding several battered copies in the past which I left in the shop. Not so much a pure drum 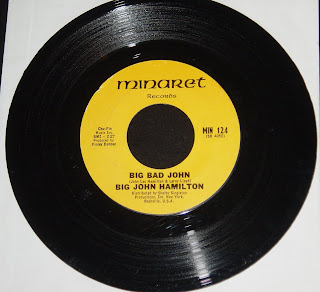 break, but some dope drums and a bassline that anyone into Hip Hop will recognise.
hint: the track that used it is from the late 80's and was by an icon on the mic.
Here JOHN HAMILTON claims to be lying in the rain with Buffalo Bill. They call him "BIG BAD JOHN" and he "don't care a hell if they do!". No wonder the MC in question used this funk gem for a hip hop backbone, as the mood of this joint is definitely braggadocious (have I spelt that right??)
Also if you listen on into the track you will also notice a horn squeal that was also used to lace over the original beat. Dope stuff! But can you tell me who it was?? I have took a moment to loop the beat and add the horn. Have a listen for yourself...
Big Bad John

"Hector" is probably best known as the backbone of the New Jack Swing! Teddy Riley used it in Wreckx-n-Effect, "New Jack Swing" and R&B was never the same (at least in the late 80s/early 90s).

Dope 45s; we can never get enough! Thank you.