PRIMO, PREMO, DJ PREMIER, or one half of the group GANG STARR - however you know him, there's no denying this is one producer who has contributed HUGELY to hip hop music over the last twenty years. 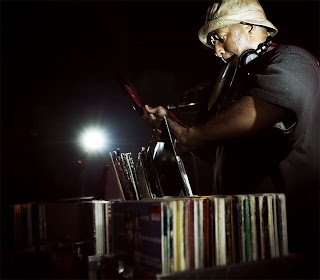 Not only do most other Hip Hop artists wanna work with him, but he has also inspired a million and one other beatmakers to pick up a SP1200 or MPC2000 (or other weapon of choice) and rock their own shit. I'm sure most artists would admit to being a fan of GANG STARR's beatman, and would give their right arms to emulate that wall of sound that he creates so well. Without doubt, that DJ PREMIER sound is so tight, and using some well-picked samples and his clever formulae he creates one banger after another...even when lazily using the same drum noises for a whole album (and his new trick is to leave out the hats as I'm sure you have noticed!)
But you cannot dispute the fact the man has got serious talent where beats are concerned. And why would you want to? Go and count how many GANG STARR or PRIMO-produced records you have in your crates - the list is endless trust me!
So to celebrate all things P-P-P-P-PREMIER P-P-P-P-PREMIER ... here's just a few of our favourite PRIMO beats.

(note: been having problems with Divshare files playing slowly, so I'm afraid its back to Zshare)

GANG STARR - "Gotch U" HUNTER MIX
Despite the fact that DJ PREMIER was not there at GANG STARR's early days, it wasn't long before the 45 KING gave over the reigns to PREMIER and the group went on to bigger success. The LP "No More Mr Nice Guy" was well received but wasn't strong enough to make the group blow the hell up. The time for this would eventually come with PRIMO's trademark sound, and the 2nd effort, STEP IN THE ARENA, established them as hip hop icons. The HUNTER MIX is taken from the POSITIVITY 12" release on the German BELLAPHON label, with different mixes of this track and also the Whole World Mix of "Positivity". Not PRIMO's best work I agree, but I just love to hear his different mixes of the old joints, especially this one using JAMES BROWN's Give It Up Or Turn It Loose drums.
Gotch U

GANG STARR - "Now You're Mine"
I'm not sure why I love this beat so much, but suffice to say it's been my mobile phone ringtone for 3 or 4 years. To listen to it briefly sounds like a quick horn loop, double bass slap, and some well placed drums. But listen closer and this beat illustrates perfectly how DJ PREMIER gets his shit sounding so nice in the mix. The drum pattern is funky and inconspicuous, while the (Ahmad Jamal??) horns hypnotise with repetitive synchronisity, only to be broken with teasing fades and pauses for Guru to drop his punchlines. Plus some added white noise during bars to break up the horns. CLASSIC!
Now You're Mine

BIG DADDY KANE - "Show & Prove"
We all know PRIMO has made beats for a multitiude of emcees, but check the list of appearances just on this track....Kane himself, Jay-Z, Ol' Dirty Bastard, Scoob Lover, Sauce, and Shyhiem. This beat is tough, and has always been a play out favourite of ours. Bouncy and uptempo.....just how we like it. Scoob's verse on this joint is off the wall! Crazy English accent too!
Here's the INSTRUMENTAL version.
Show & Prove

JAY-Z - "Friend or Foe"
Again DJ PREMIER helping elevate an emcee to another level. It would take days to total up how many artists have had a helping hand from a PRIMO produced beat or two. But none more so than JAY-Z. Back in '96 his "Reasonable Doubt" LP was a huge yet calculated risk by the Jiggaman, both in going it solo but also by starting his fledgling Roc-a-Fella label with his own money. But to have some solid production skills from PRIMO ensured street sales and wide appeal. The rest is history.
Friend or Foe

MOP - "Handle Ur Bizness" PREMIER REMIX
I wasn't always an MOP fan because of all the shouting, but over the years the PRIMO beats have won me over, and here is a classic late 90's banger remixed by the man himself. Billy Danze and Lil Fame's dark past is echoed by the sinister beat here, and PRIMO creates the usual tension for them to spit over.
Handle Ur Bizness

LITTLE VIC - "The Exorcist"
A fairly recent production but one of his most catchy since the turn of the millenium. Features his trademark little cut & paste scratches...but hey that's the PRIMO we know and love! Little Vic drops some ill lyrics on this typical head nodder, and the twelve inch wide graffiti sticker on the cover makes this the perfect PRIMO purchase. On PROJECT / ORENA RECORDS from 2005.
The Exorcist

SPECIAL TEAMZ - "The Main Event"
This time providing the beats for EDO. G, SLAINE, and JAYSAUN, and a familiar drum pattern from the boom bap king. Once again it's easy to spot his sparse use of hats or cymbals throughout, leaving the samples and soundbites to do the talking. You could describe this one as his typical, simple, yet effective beats. If the formula ain't broke....don't fix it!
Main Event

your blogs are great and to the point

question any chance of getting the full inst version of

Basically i got a Basketball game this weekend and It would be super heavy to bust that tune during the warmup - it thumps and people will just bounce - I am not a taker, I am a sharer and if you want anything else i can pass you a couple of premo gems -

props due to you sir!!

A BIG & REAL Thanks for posting true beats.